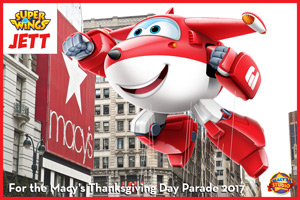 This Thanksgiving, Jett, the transforming robot-plane from the animated preschool series Super Wings, makes his debut as a giant character balloon in the 91st annual Macy’s Thanksgiving Day Parade. Jett will take flight in the famed spectacle delighting crowds of more than 3.5 million spectators lining the streets of New York City and more than 50 million people who gather together in households nationwide in celebration of the official start of the holiday season. Jett will reach extraordinary heights as he takes on a new form transforming into a giant character helium balloon measuring approximately 39-feet wide, 45-feet long, and 30-feet tall.

The new feature will see the Shoppies and Shopkins leave Shopville for a world vacation. After winning a trip to go anywhere in the world, Kooky Cookie decides to take all her friends on a holiday to London. Here they run into a pair of crooked thieves, the Biscuit Bandits, who take them on a high stakes adventures through the streets of London, Paris and Tokyo.

Entertainment/character licensing remains the largest industry category, accounting for $118.3 billion, or 45 percent of the total global licensing market. Corporate/brand trademarks was the next biggest property type, generating $54.6 billion in retail receipts for 20.8 percent of total revenues, followed by fashion, with $31.1 billion (11.8 percent of the total), and sports at $25.3 billion (9.6 percent).

The survey was conducted for the third straight year for LIMA by Brandar Consulting, LLC.

Among product categories, apparel led the way with 14.9 percent of total global licensed retail sales, followed by toys at 13.3 percent of the total, and fashion accessories at 11.3 percent. The fastest growing categories were infant and pet products, as more licensors seek to capitalize on strong industry growth present in both sectors worldwide. Fueled by increases in home ownership and new housing starts in developing countries as well as a stronger housing market in the U.S., sales of licensed home décor products grew by 8.2 percent during the current survey period. The video games/software/apps segment was again a solid performer, growing 8.1 percent. It is now the fifth largest segment, accounting for 6.9 percent of revenue.

Royalty revenue from sales of licensed merchandise and services rose 1.3 percent to $14.1 billion. This modest increase is the byproduct of a 3.5 percent decrease in the weighted average industry royalty rate, from 8.5 percent to 8.2 percent.

The U.S./Canada remains the largest market for licensed merchandise and services, with revenue accounting for 57.9 percent of the global total, up slightly from 57.7 percent last year. The Southeast Asia/PAC region was the fastest growing of all areas worldwide, with 6.8 percent year-on-year growth; it now accounts for 3.4 percent of global licensing revenue.

Columbia Pictures in association with Rovio Entertainment Ltd. are once again joining forces on the next Angry Birds adventure in The Angry Birds Movie 2. Sony Pictures will distribute the sequel. The sequel is planned to hit theaters on September 20, 2019, coinciding with the 10th anniversary of the original Angry Birds game.

The second annual Play Fair is introducing its first Industry Preview Night for members of the media and toy industry professionals on Friday, November 3 from 6-8 p.m., the evening before Play Fair opens to the public. The special event will offer press, buyers, and industry professionals advance access to exhibitors, talent, entertainment, and play experiences. Preview Night attendees will also receive a first look at the nominees for The Toy Association’s 2018 Toy of the Year (TOTY) Awards.

Hosted by The Toy Association, in partnership with Leftfield Media, Play Fair returns to New York City’s Jacob K. Javits Convention Center from November 4–5. The inaugural event was held in February 2016 with a sold-out crowd boasting more than 20,000 parents, children, and toy enthusiasts. Play Fair organizers expect a significantly larger crowd this year, with an expanded 230,000 square feet of space (triple the size of Play Fair 2016), a new Industry Preview Night, and additional stages featuring exclusive content. The upcoming Play Fair will also feature more character appearances, and the Toys “R” Us main stage will double its seating to accommodate twice the number of excited fans.

Play Fair 2017 will feature returning brands Nickelodeon, LEGO, Hasbro, and Mattel, all of which are planning amplified, one-of-a-kind experiences for 2017. New exhibitors will include companies such as Alex Brands, VTech/Leapfrog, Cartoon Network, Snazaroo, WowWee, and Magformers.