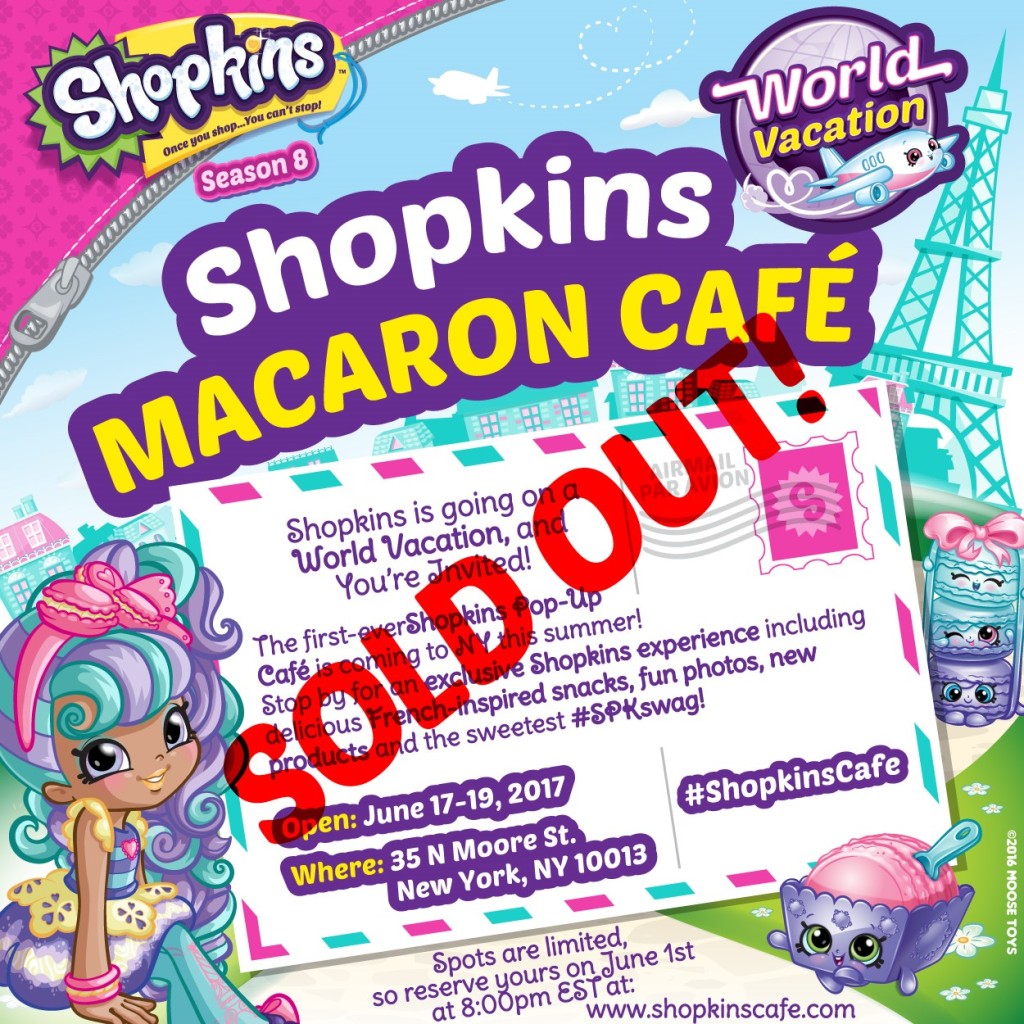 Reservations for Moose Toys’ limited-time Shopkins Macaron Café took only one minute to sell out after going live at www.shopkinscafe.com on June 1 at 8 p.m. ET.

Shopkins fanss waited for the reservations to go live and scooped up hundreds of spots immediately. The exclusive, one-of-a-kind experience currently has more than 4,000 families on the waiting list.

The Shopkins Macaron Café will let kids step into the world of Shopkins to celebrate the launch of Shopkins Season 8: World Vacation. The first wave of Shopkins: World Vacation tours Europe, introducing new Shopkins and Shoppies characters inspired by France, Italy, Germany, the UK, and more.

Opening its doors in New York City from June 17–19 in Tribeca, the café is completely free to attend for fans with a reservation. The Shopkins Macaron Café is Parisian-themed, inspired by one of the newest playsets in season eight, the Oh La La Macaron Café. Inside the café, fans will be greeted with amazing Shopkins photo opportunities, a dazzling manicure station, and close-up looks at and opportunities to play with season eight products. Guests can also enjoy Shopkins macarons.

Warner Bros. Interactive Entertainment announced that it will live broadcast the WB Games Live! event for the first time from the Electronic Entertainment Expo (E3) show floor. Coming straight from the Los Angeles Convention Center, the event will be streamed throughout the days of the show, June 13–15, and can be viewed at live.wbgames.com.

WB Games Live! will give gamers and fans who are not able to attend E3 the chance to join in and take part in the show. Those who tune-in will see live gameplay demos, discussions with game developers and surprise guests as well as cosplay contests. They will also be able to enter for online giveaways and prizes.

The video game titles that will be featured in the WB Games Live! show include: Middle-Earth: Shadow of War, Injustice 2, LEGO Marvel Super Heroes 2, LEGO Worlds, and LEGO Dimensions. 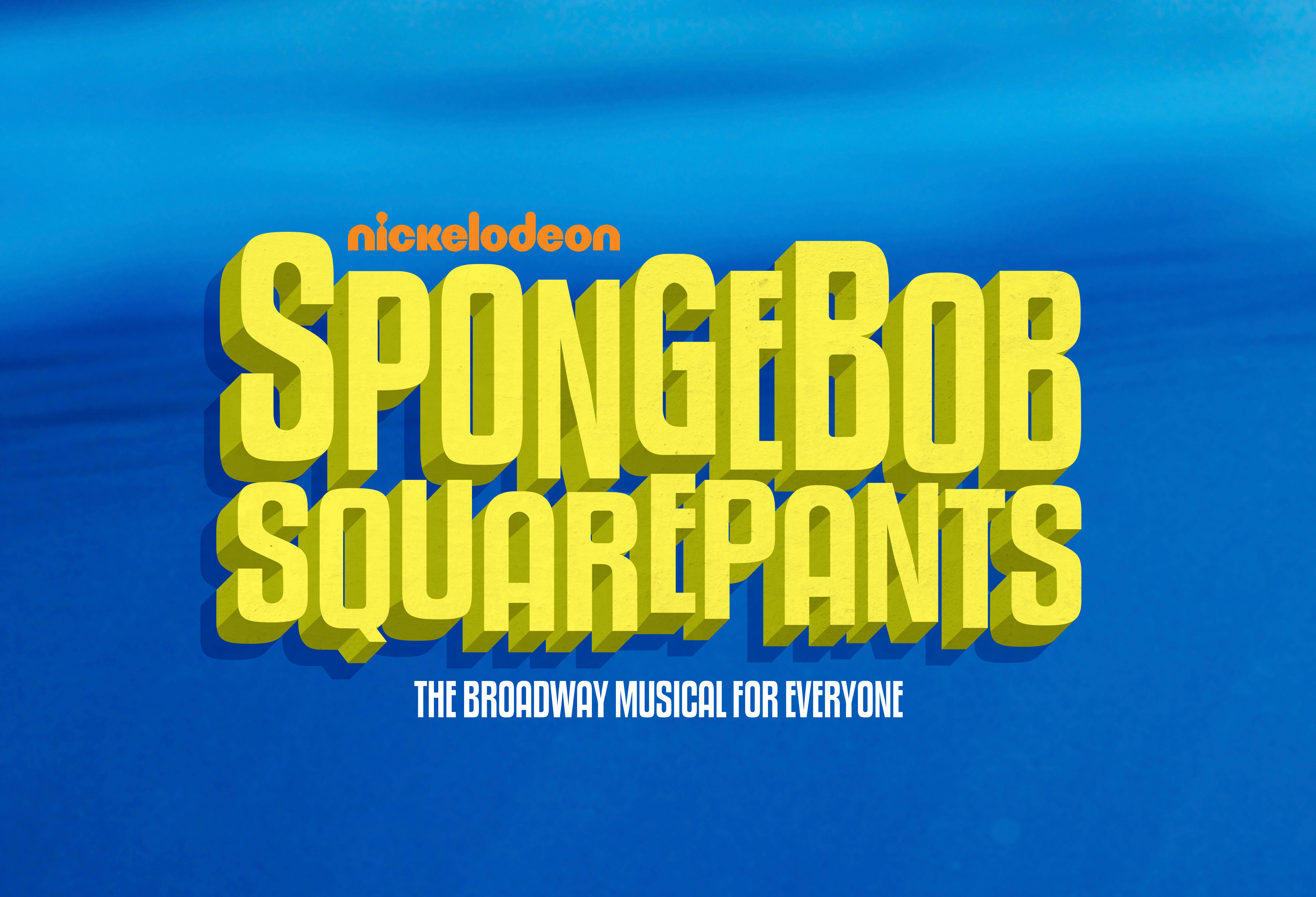 SpongeBob To Take Stage on Broadway

Nickelodeon, in partnership with The Araca Group, Sony Music Masterworks, and Kelp on the Road, will open SpongeBob SquarePants on Broadway at The Palace Theatre this fall. This follows the show’s Chicago debut in summer 2016.

The musical tells the story of SpongeBob and the rest of Bikini Bottom as they face the total annihilation of their undersea world. As chaos erupts and when all hope seems lost, an unexpected hero will rise up and take center stage to save the day.

It will feature original songs by Yolanda Adams, Steven Tyler and Joe Perry of Aerosmith, Sara Bareilles, Jonathan Coulton, Alexander Ebert of Edward Sharpe & The Magnetic Zeros, The Flaming Lips, John Legend, Lady Antebellum, Cyndi Lauper, Panic! At the Disco, Plain White T’s, They Might Be Giants and T.I., and a song by David Bowie, with additional lyrics by Jonathan Coulton.

SpongeBob SquarePants is a musical production conceived and directed by Tina Landau; book by Kyle Jarrow; orchestrations, arrangements, and music supervision by Tom Kitt; with choreography by Christopher Gattelli. The designers behind Fun Home, Hedwig, and Spring Awakening have reimagined Bikini Bottom for the Broadway stage.

Nickelodeon and Sony Masterworks Broadway have recorded the cast album of SpongeBob SquarePants and will announce its release shortly.

Judd Zebersky, founder and CEO of Jazwares, was presented with the Owler 2017 Top Rated CEO Award. Owler is a community-based platform used for business insights by business professionals across all industries and in all job functions. Owler recognizes the top rated CEOs from their business insights platform.

Zebersky traded in his career as an attorney to start the consumer products company 20 years ago. Thousands of products later and Jazwares continues to be a leader in the industry for designing, manufacturing, and distributing its items worldwide.

“I am deeply honored to be recognized as a leader in the industry by the Owler community,” says Zebersky. “Jazwares is surrounded by the best professionals in the toy industry and will continue to bring all-time favorites and beloved toys to children all around the world.”

Owler Awards are distributed according to Owler community ratings, comprised of more than 1 million active business professionals across a multitude of roles and industries. Owler recognizes the top 1,000 CEOs from 167,000 across 50 cities and 25 industries worldwide making the awardees among the top 0.60 percent of business leaders.