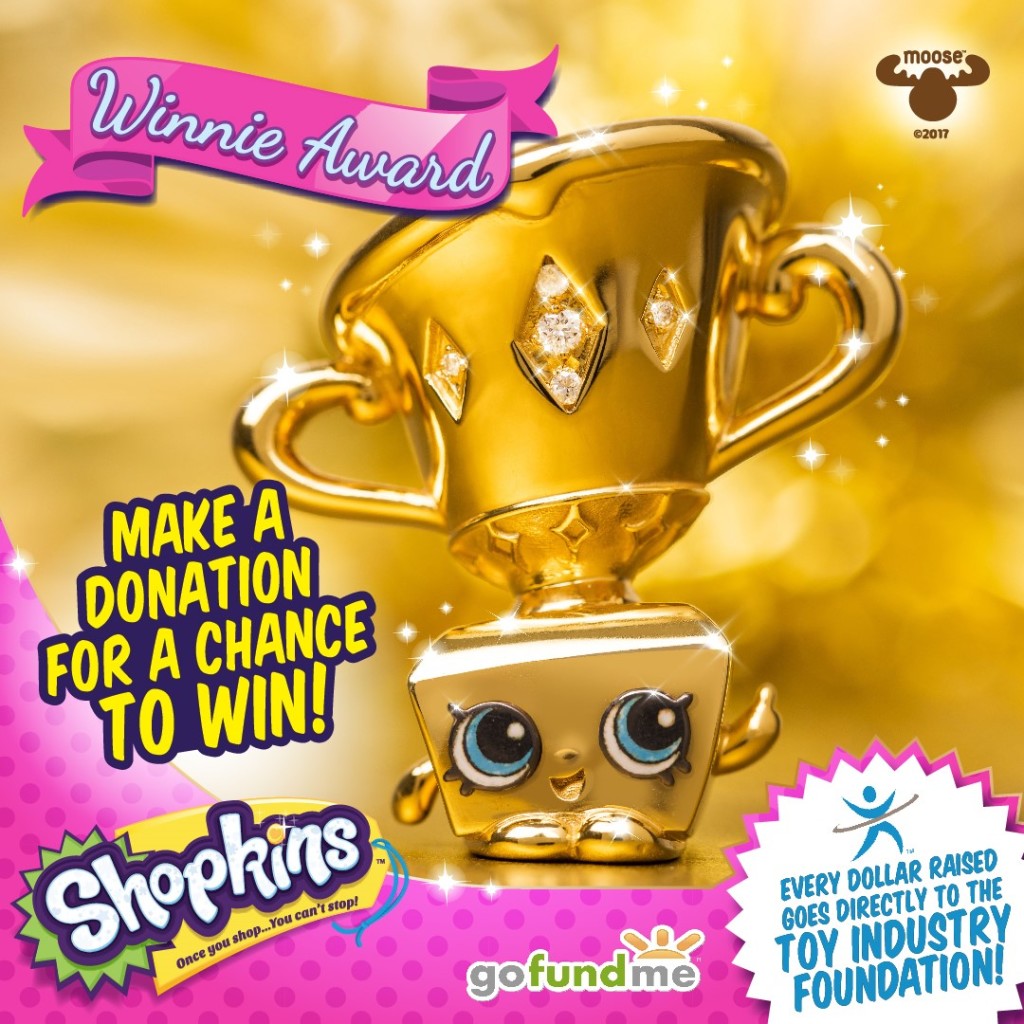 Moose Toys is launching an online fundraising campaign where one lucky fan will take home Winnie Award, the one-of-a-kind, gold-plated, and diamond-encrusted Shopkins of the Year. First introduced to fans at this year’s New York Toy Fair, Winnie Award has spent the year traveling to fan events, such as Play Fair, and visiting YouTube influencers, including CookieSwirlC and DCToys Sandaroo Kids.

Fans will have a chance to win the super rare Shopkin by donating at least $5 on Winnie Award’s GoFundMe page. All proceeds will benefit the Toy Industry Foundation, a 501(c)3 children’s charity whose mission is to provide joy and comfort to children in need through the experience of toys and play. Fans can enter the contest beginning today, November 15, through Cyber Monday, November 27 at 11:59 p.m. EST.

This is the second time that Moose Toys has introduced a one-of-a-kind Shopkins character to benefit the Toy Industry Foundation. In 2015, Moose Toys hosted a charity auction for Gemma Stone, one-of-a-kind, precious character, which ultimately sold on eBay for $21,500. All proceeds were donated to the Toy Industry Foundation to provide toys to kids in need during the holiday season.

To enter the contest by making a donation to the nonprofit for their chance to win Winnie Award, fans can visit www.gofundme.com/spkwinnieaward/donate, starting today through November 27. Fans can also enter by sending in a mail-in submission.

Consumers looking for a solution to help manage their child’s screen and online time can now purchase ryfi, the wifi pause button, via its Indiegogo campaign site.

ryfi is a hardware device and a mobile app that lets parents take control of their kids’ screen time. Creating a wifi network in the home dedicated just for kids, parents manage when ryfi is “on” using a simple set of features in the app. Using ryfi, parents can set screen time boundaries for their kids without disrupting their own wifi or any other connected devices throughout the house that rely on the internet.

Created and executive produced by Matthew Wexler, D.N.Ace combines “the perfect formula of science fiction, science fact, and loads of awesome.” The series follows 12-year-old Ace Ripley who suddenly learns he holds the ability to manipulate DNA by fusing the genes of a living thing with any other thing to create something entirely new. The hero-in-the-making uses his newfound power to create ridiculous, amazing, and even terrifying mash-ed up creatures, and tries to save his town from total chaos while trying to have the time of his life.

D.N.Ace will air on the Teletoon Network in Canada for kids ages 6–9. Each episode will be 2×11 minutes, with a total of 80 episodes (or 40 x 22 minutes). Dentsu and OLM will be representing the series in Japan and will be consulting throughout the production process.

The paper airplane, the Wiffle Ball, and Clue are the latest inductees to The Strong’s National Toy Hall of Fame. The honorees were selected from a field of 12 finalists that also included the Magic 8 Ball, Matchbox Cars, My Little Pony, PEZ Candy Dispenser, play food, Risk, sand, Transformers, and Uno.

About the paper airplane: Artist and inventor Leonardo DaVinci sketched and designed flying creations using parchment in the 15th century. Later, in the early 19th century, Sir George Cayley identified four primary forces—lift, drag, weight, and thrust—which eventually helped the Wright Brothers first take flight in 1903. These defining moments helped lead to the purported invention of the paper airplane in 1909—but its exact origin is unclear. Experts can agree that the principles that make an airplane fly are the same that govern paper versions. Paper’s high strength and density make it similar, scale wise, to the materials out of which actual airplanes are constructed.

“Where some toys require financial investment, paper airplanes start with a simple sheet of paper, coupled with creativity and dexterity, to produce a toy with infinite aeronautical possibilities,” says Christopher Bensch, The Strong’s vice-president for collections. “They allow the imagination to takeoff and soar!”

About the Wiffle Ball: A retired semi-pro baseball player in 1950s suburban Connecticut noticed that his son and friend could not play a game of baseball in the cramped space of their backyard (especially without breaking any windows). He began cutting holes in spherical plastic containers and gave them to his son for testing, eventually developing a ball with eight oblong slots that allowed the ball to grab air, thus diverting its trajectory. With it, a pitcher could easily throw a curve, a slider, or a knuckle ball. The Wiffle Ball slowed the game, shrunk the playing field, and made it conducive to post World War II-suburbia. The family-owned Wiffle Ball Inc. opened in Connecticut and established rules for the game of Wiffle Ball. Soon, it was producing millions of Wiffle Balls each year and it continues to do so.

“The Wiffle Ball changed the outdoor play landscape, taking the basics of backyard baseball and transforming it into something easier for neighborhood kids to negotiate. In the more than 60 years since its introduction, generations of Little League, high school, college, and pro sluggers have begun their baseball careers swinging at a Wiffle Ball,” says Curator Michelle Parnett-Dwyer.

About Clue: A British couple designed Clue during World War II and based it on the murder-mystery dinner parties popular around that time. They patented the game in 1944 and successfully pitched it to Waddington Games, but material shortages kept it out of production for several years. Then, in 1949, Waddingtons released it under the name “Cluedo.” Gaming giant Parker Brothers purchased the rights and released it in America under the name “Clue” shortly thereafter. The game—in which players must deduce with available evidence the murderer of the luckless Mr. Boddy—became a quick success. It remains one of the top 10 best-selling games of all time.

Says Curator Nicolas Ricketts, “Millions of Clue games are sold each year—including a junior version, as well as travel, advanced, collectors, and themed editions. Clue has also had its own movie, been featured in numerous television and books, and remains an icon of pop culture.”

“We’re very pleased with Target’s third quarter performance, including traffic and sales growth that demonstrate we’re building on the progress we saw in the first half of the year,” says Brian Cornell, chairman and chief executive officer of Target Corporation. “The investments we’re making in our business will help Target drive long-term success and ensure we’re well positioned to deliver for guests in the all-important holiday season. Our assortment now includes thousands of new items from the eight exclusive brands we’ve launched throughout 2017, including Hearth and Hand with Magnolia, our new home goods partnership with Chip and Joanna Gaines. Guests this holiday season will experience elevated in-store service reflecting our investments in wages, training and additional hours for our team, and they’ll find more value than ever before through a combination of being priced right daily and offering impressive deals. While we expect the fourth-quarter environment to be highly competitive, we are very confident in our holiday season plans.”

Fourth quarter and full-year 2017 GAAP EPS from continuing operations may include the impact of additional discrete items which will be excluded in calculating Adjusted EPS. The Company is not currently aware of any such discrete items.

The Company announced today that it plans to issue a post-holiday financial update on Tuesday, January 9, 2018.

Interest Expense and Taxes from Continuing Operations
The Company’s third quarter 2017 net interest expense was $254 million, compared with $142 million last year. The increase was driven by a $123 million charge related to the early retirement of debt in third quarter 2017, partially offset by the benefit of lower average debt balances.

Third quarter 2017 effective income tax rate from continuing operations was 22.3 percent compared with 33.8 percent last year. The decrease was primarily due to the net tax effect of the Company’s global sourcing operations, the resolution of other income tax matters and the effect of lower pretax earnings.

Capital Returned to Shareholders
In third quarter 2017, the Company returned $510 million to shareholders, which consisted of:

Dividends of $339 million, compared with $345 million in third quarter 2016.
Share repurchases totaling $171 million, including an accelerated share repurchase (ASR) agreement that retired 2.8 million shares of common stock at an average price of $57.78, for a total investment of $161 million. Final settlement of the ASR occurred in November, and 0.3 million of the 2.8 million shares repurchased through the ASR were delivered in November.
As of the end of third quarter 2017, including the $161 million repurchased under the ASR, the Company had approximately $4 billion of remaining capacity under its current $5 billion share repurchase program.