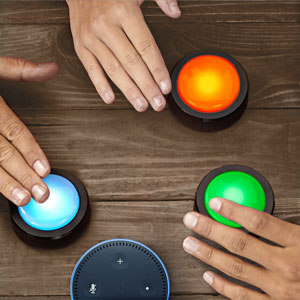 Amazon Echo Buttons are a simple but creative way for customers to play interactive games with their friends and Alexa, adding new and innovative methods of game play for beloved brands like Trivial Pursuit. Paired with the introduction of new Echo Buttons, Trivial Pursuit Tap provides a fun, game show-style competition with “buzzers” and all. Compete with friends to be the first to buzz in and answer questions from one of six categories. If you answer correctly, you can push your luck and attempt more questions.

Each Echo Button connects via Bluetooth to a customers’ compatible Echo device. The buttons illuminate and can be pressed to trigger a variety of multiplayer and single-player game experiences through Alexa skills.

This integration is timed to the holiday family gaming season, and is a first for Amazon and Trivial Pursuit.

“This transformative, in-home technology will make Trivial Pursuit more animated and exciting than ever,” says Jonathan Berkowitz, senior vice-president of marketing for Hasbro Gaming. “At Hasbro Gaming, we’re consistently working with the best minds both inside the company and beyond to create the world’s best – and most unique – play experiences for our fans across the globe, and we’re confident this collaboration with Amazon will do just that.”

Trivial Pursuit is the first major board game to be adapted for Alexa with Echo Button capabilities. Initially, Trivial Pursuit Tap will launch in the U.S., UK, and Germany. Amazon Echo buttons will be available as two-packs for $19.99; up to four buttons can be connected to a compatible Echo device. Players can use the buttons as triggers to answer questions, and the buttons light up and assign different colors for each player.

“Our results for the quarter were disappointing. They not only reflect the broad competitive trends across retail, they demonstrate the continued challenges we face in both the baby and learning categories. Though we continue to see growth in our core toy category, we recognize the need for change in order to better meet customers’ ever evolving shopping preferences” said Dave Brandon, Chairman and Chief Executive Officer, Toys“R”Us, Inc. “The financial restructuring process that we kicked off in mid-September was a critical first step, allowing us to restructure our balance sheet and make the necessary investments in the right initiatives needed to reinvent our business and deliver on our commitment to be Champions of Play for kids everywhere and a trusted resource and friend for parents around the world. This process won’t happen overnight but I am confident the steps we are taking will meaningfully improve the customer experience.”

On September 18, 2017 (“the Petition Date”), TRU and certain of its U.S. subsidiaries and its Canadian subsidiary voluntarily filed for relief under Chapter 11 of the Bankruptcy Code. In addition, Toys-Canada voluntarily commenced parallel proceedings under the CCAA in Canada. In accordance with accounting principles generally accepted in the United States (“GAAP”), as joint control by the U.S. and Canadian courts does not constitute continued common control by the company, the operating results of Toys-Canada and its subsidiaries are no longer consolidated with TRU subsequent to September 18, 2017. Due to the deconsolidation of Toys-Canada, the TRU operating results during fiscal 2017 are not comparable with fiscal 2016 and therefore Canada was discussed from the results discussed below.

• Net sales were $2,018 million, a decrease of $89 million compared to the prior year period. Excluding a $6 million negative impact from foreign currency translation, net sales declined by $83 million largely attributable to a decline in same store sales most notably in the baby category. Partially offsetting the decrease was an increase in consolidated e-commerce sales.

• Consolidated same store sales decreased by 4.4% driven by a 7.0% decline domestically, offset by a 0.4% increase within International Ex. Canada, as a result of growth in Asia.

• SG&A was $798 million, an increase of $13 million compared to the prior year period. The increase in SG&A was primarily due to an increase in advertising expenses and restructuring advisory fees, partially offset by expense reduction initiatives.

• Operating loss was $208 million, compared to $40 million in the prior year period. Domestic segment operating loss increased by $95 million due to a reduction in gross margin dollars. International Ex. Canada operating earnings decreased by $20 million. Corporate overhead increased by $53 million primarily due to the gain in third quarter 2016 on the sale of the FAO Schwarz brand.

• Adjusted EBITDA for the quarter was negative $97 million, compared to positive $5 million in the prior year period.

• Reorganization items, net1 of $334 million consist of expenses and gains and losses that directly relate to the restructuring process.

• The above results produced a Net loss of $624 million, compared to $160 million in the prior year period.

The company, including TRU Delaware and Toys-Canada, ended the third quarter with total liquidity of $1.3 billion, which was comprised of cash and cash equivalents of $461 million (inclusive of $29 million of Toys-Canada cash) and availability under committed lines of credit and the Term DIP Facility of $837 million. Total availability under the $1.85 billion DIP ABL Facility was initially capped at $1.3 billion and has subsequently expired. Excluding the cap, the Company would have had total liquidity of $1.5 billion as of the third quarter.

Through the end of the third quarter, capital spending (inclusive of Toys-Canada through September 18, 2017) was $120 million, compared to $174 million in the prior year period, a decrease of $54 million.

The NPD Group announced the upcoming launch of a consumer panel tracking service measuring the actual TV and movie viewing behavior at the title and episode level on Netflix, Amazon Prime Video, and Hulu. Complementing NPD’s other products for the video-entertainment industry, Subscription Video Track offers companies insight into what subscribers are watching, the viewers of specific content, how valuable individual titles are to overall viewing rates, and longitudinal viewing trends. 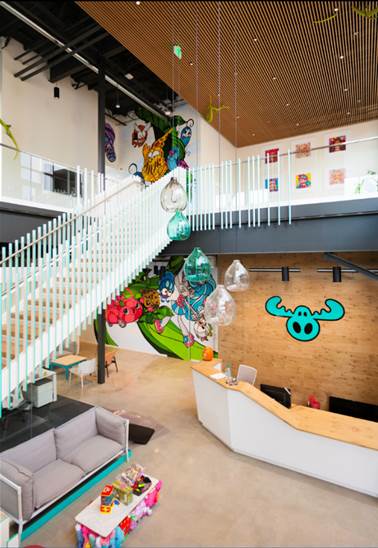 Moose Toys has a new home in the U.S. after relocating to a new space for its 50 employees based in Los Angeles.

Located in the heart of El Segundo, the new U.S. home of Moose Toys is nearly 23,000 total square-feet, covering two floors across two buildings. It’s four times the size as its previous L.A. office and will accommodate up to 85 staff members.

The two buildings are joined by a second-story breezeway to join the sales and marketing offices with the product showroom.

“This is our way of thanking and awarding those retailers that work hard 365 days a year and bring value to the Toy Industry as well as the local community,” says WTHRA President Bill St. John.

Retail stores, manufacturers, reps, and customers are encouraged to submit an application on ToyFest West.com to nominate a retail toy, gift, baby, educational or e-tail store they value, enjoy, and find deserving of this honor. The WTHRA Slate of Officers will choose a retailer to be featured each month starting January 2018. A recipient of the Retailer of the Month award will be featured on the ToyFest West (TFW) website with a photo and short bio about the store and its owners, receive a framed certificate to hang in their store, and be announced on the TFW social media pages.

WTHRA will continue to honor Retailer of the Year and Hall of Fame Inductees with an invitation to the ToyFest West Gala. These pioneers and leaders in the toy industry are chosen by Chairman of the Board Blake Goldenberg, with nominations from WTHRA’s Board of Directors and TFW’s Slate of Officers. Hall of Fame Inductees and Retailer of the Year will be announced this month.

Genius Brands is expanding the Baby Genius programming, available to Xfinity TV customers in the U.S., with its popular animated series

The new destination, which complements the Genius Brands’ Kid Genius Cartoon Channel also available on Xfinity on Demand, will include animated series such as The Adventures of Paddington Bear, Rainbow Valley Fire Department, Baby Prodigy, Igloo-Gloo, Pirates Adventures in Art, So! Smart and Todd World. Initially, approximately 10 new series will be added to Xfinity on Demand, which Xfinity TV customers can access in the home and on the go via the Xfinity Stream app and portal. Xfinity X1 customers can call up the new destination and its lineup of preschool programming by saying “Baby Genius” into their X1 voice remote.

Toddlers and their parents can also continue to enjoy the award-winning Baby Genius® music video franchise within the new destination on Xfinity TV. Genius Brands’ Kid Genius Cartoon Channel delivers entertaining and informative content for kids six to 11-years old and is also available on the go via the Xfinity Stream Ap web and portal.