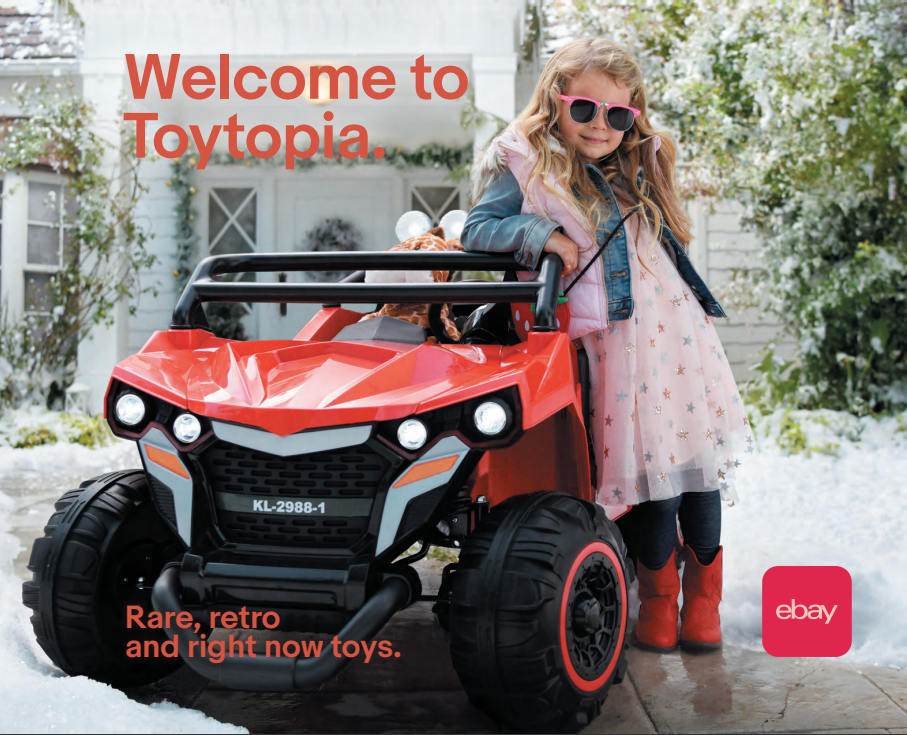 A printed version of the toy book will be delivered to millions of homes, and shoppers everywhere can explore eBay’s toy book online – and discover more holiday toys and gifts at eBay.com/toytopia all season long.

eBay’s toy book is home to other new and collectible toys such as the newest Harry Potter Hogwarts Great Hall LEGO set and a $25,000 life-size LEGO Batman.

Beginning November 16 at Chelsea Market (75 Ninth Ave), eBay’s toy book comes to life in New York City. The event is free and open to the public, and will feature an interactive winter wonderland where kids can play with the top toys of the season, check out toys of seasons’ past, and vote for their favorites. Top gifts include 2018’s FurReal Ricky, WowWee Fingerlings Hugs Bella, Monopoly: Fortnite Edition, Pomsies Speckles, and more.

This holiday season, Facebook is headed into Macy’s retail stores. The social media giant announced the opening of small business pop-up concepts in nine Macy’s locations across the U.S. to bring 100 of the most-loved small businesses and digital-native brands on Facebook and Instagram into retail stores for the holiday shopping season.

To mark the opening, many of the brands appearing in Macy’s Herald Square, New York location will be celebrated in an ad campaign running in New York City’s Grand Central Station. The campaign, which will run for three weeks, will inspire shoppers to visit The Market @ Macy’s to shop brands like Two Blind Brothers, Love Your Melon, Bespoke Post and Charleston Gourmet Burger Company.

Amazon has selected New York City and Arlington, Virginia, as the locations for the company’s new headquarters. Amazon will invest $5 billion and create more than 50,000 jobs across the two new headquarters locations, with more than 25,000 employees each in New York City and Arlington. The new locations will join Seattle as the company’s three headquarters in North America. In addition, Amazon has selected Nashville for a new Center of Excellence for its Operations business, which is responsible for the company’s customer fulfillment, transportation, supply chain, and other similar activities. The Operations Center of Excellence in Nashville will create more than 5,000 jobs.

Located just across the East River from Midtown Manhattan and the Upper East Side, Long Island City is a mixed-use community where arts and industry intersect. Long Island City offers eight subway lines, 13 bus lines, commuter rail, a bike-sharing service, and ferries serving the area, with LaGuardia and JFK airports in close proximity.

As part of Amazon’s new headquarters, New York and Long Island City will benefit from more than 25,000 full-time high-paying jobs; approximately $2.5 billion in Amazon investment; 4 million square feet of energy-efficient office space with an opportunity to expand to 8 million square feet; and an estimated incremental tax revenue of more than $10 billion over the next 20 years as a result of Amazon’s investment and job creation.

Amazon will receive performance-based direct incentives of $1.525 billion based on the company creating 25,000 jobs in Long Island City. This includes a refundable tax credit through New York State’s Excelsior Program of up to $1.2 billion calculated as a percentage of the salaries Amazon expects to pay employees over the next 10 years, which equates to $48,000 per job for 25,000 jobs with an average wage of over $150,000; and a cash grant from Empire State Development of $325 million based on the square footage of buildings occupied in the next 10 years. Amazon will receive these incentives over the next decade based on the incremental jobs it creates each year and as it reaches building occupancy targets. The company will separately apply for as-of-right incentives including New York City’s Industrial & Commercial Abatement Program (ICAP) and New York City’s Relocation and Employment Assistance Program (REAP).

The community will benefit from New York City providing funding through a Payment In Lieu Of Tax (PILOT) program based on Amazon’s property taxes on a portion of the development site to fund community infrastructure improvements developed through input from residents during the planning process. Amazon has agreed to donate space on its campus for a tech startup incubator and for use by artists and industrial businesses, and Amazon will donate a site for a new primary or intermediary public school. The company will also invest in infrastructure improvements and new green spaces.

National Landing is an urban community in Northern Virginia located less than three miles from downtown Washington, D.C. The area is served by three Metro stations, commuter rail access, and Reagan National Airport—all within walking distance. The community has a variety of hotels, restaurants, high-rise apartment buildings, retail, and commercial offices. National Landing has abundant parks and open space with sports and cultural events for residents of all ages throughout the year.

As part of Amazon’s new headquarters, Virginia and Arlington will benefit from more than 25,000 full-time high-paying jobs; approximately $2.5 billion in Amazon investment; 4 million square feet of energy-efficient office space with the opportunity to expand to 8 million square feet; and an estimated incremental tax revenue of $3.2 billion over the next 20 years as a result of Amazon’s investment and job creation.

Amazon will receive performance-based direct incentives of $573 million based on the company creating 25,000 jobs with an average wage of over $150,000 in Arlington. This includes a workforce cash grant from the Commonwealth of Virginia of up to $550 million based on $22,000 for each job created over the next 12 years. Amazon will only receive this incentive if it creates the forecasted high-paying jobs. The company will also receive a cash grant from Arlington of $23 million over 15 years based on the incremental growth of the existing local Transient Occupancy Tax, a tax on hotel rooms.

The community and Amazon employees will benefit from the Commonwealth investing $195 million in infrastructure in the neighborhood, including improvements to the Crystal City and the Potomac Yards Metro stations; a pedestrian bridge connecting National Landing and Reagan National Airport; and work to improve safety, accessibility, and the pedestrian experience crossing Route 1 over the next 10 years. Arlington will also dedicate an estimated $28 million based on 12% of future property tax revenues earned from an existing Tax Increment Financing (TIF) district for on-site infrastructure and open space in National Landing.

Downtown Nashville, along the Cumberland River, is the heart of the city just north of the Gulch and is home to urban living, retail, restaurants, entertainment venues, hospitality, open green spaces, and offices. The area is served by commuter rail, more than a dozen bus routes, and is a 15-minute drive to Nashville International Airport.