Spuds Inc., a producer of organic and all natural infant and toddler feeding products, and Discovery Communications announced that they will develop a line of feeding products for TLC Baby, a brand dedicated to new and expecting parents. The product line will be introduced to retailers this spring.

The deal was brokered on behalf of TLC Baby by its licensing agent, Big Tent Entertainment. 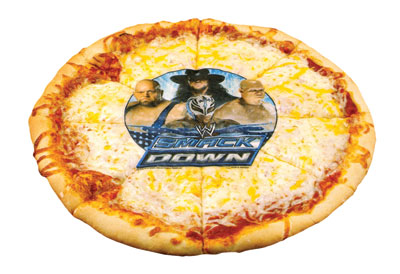 In addition to WWE, Pizza Prints also has licensing deals with Nickelodeon, the National Basketball Association, the National Collegiate Athletic Association, and more than 80 colleges and universities, as well as HIT Entertainment for Bob the Builder and Thomas & Friends.

Patch Products Gets an App

Patch Products announced that its lightning-fast dice game, Word Shout, is now an app for the iPhone, iPad, and iPod Touch.

Created by Paze Interactive, players never know what words could be created after the 10 lettered dice are presented randomly. First, find a word. Then, swipe up to play your word. Players have 30 seconds (or 60 seconds based on your choosing) to spell as many legitimate words as possible—the longer the word, the higher the score.

Play solo or play one-on-one with friends on Game Center or with the Pass-n-Play feature. The app is available for $0.99.