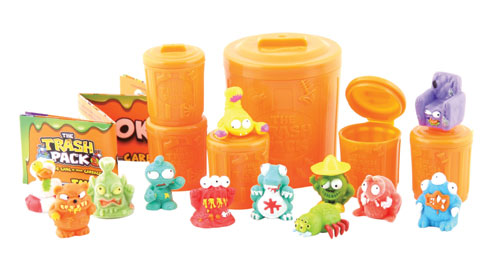 The Licensing Shop, on behalf of its client, Moose Toys announced several additional licensees joining The Trash Pack licensed merchandise program in the U.S. The program already includes previously announced partners such as Parragon Books Ltd. as the master publishing partner for the brand. The new deals were brokered by The Licensing Shop and include the following licensees: Pressman Toys for U.S. and Canadian rights for board games and puzzles; Accessory Innovations for U.S. rights for backpacks, bags, hosiery, cold weather accessories, lunch bags and headwear; Mad Engine for U.S. rights for T-shirts and fashion tops; and Bulls I Toys for U.S. and Canadian rights for impulse novelty toys.

Studio Licensing announced that it is representing Peppa Pig for licensing and merchandising in Canada. Peppa Pig, licensed by Entertainment One Family, is now on the air in more than 180 countries. A consumer products program is expected to launch in 2013.

ACME Studio, the manufacturer of design objects and accessories, announced the third installment of the Beatles Collection, the result of a licensing agreement with Apple Corps, Ltd. brokered by Live Nation Merchandise.

Acme will release nine individually numbered limited-edition pens commemorating each year that the Beatles were together, the Singles eyeglass case featuring a collage of some of the most interesting and exciting singles covers that were done during the Beatles’ career, and a pen and card case set packaged within miniature album covers.

Monogram will soon begin producing Johnsonville Deli Bites, available in Original, Salami, and Beef varieties, as well as Applewood Smoked Bacon Jerky. These products are expected to be available at retail and convenience store shelves nationwide this summer. Additional meat snack offerings are being developed and are expected to launch in the future.

This partnership was developed through The Joester Loria Group, which represents Johnsonville Sausage.