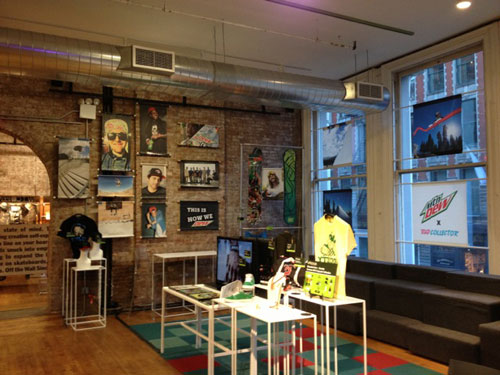 The Joester Loria Group brokered a deal on behalf of its client, Mountain Dew, with Society Original Products as the next partner in its Green Label Exclusives program.

The collection will feature a camo print and current and vintage Mountain Dew logos and slogans. Society Original Products will be targeting online and specialty action sports retailers to carry the line.

The Jim Henson Company has appointed Wild Pumpkin as the licensing agent for its Pajanimals preschool series in Australia and New Zealand.

A co-production with The Jim Henson Company, 24-hour preschool channel Sprout and Sixteen South Television, Pajanimals airs on ABC in Australia and TVNZ in New Zealand.

The TOMY plush toy line launched in November. This month, sleepwear will be available to consumers through Target.

Throughout 2013, the Pajanimals licensing program will be expanding into other key product categories, including bedding, bath time products, additional toys, live events, and more.

The Giochi Preziosi Group will launch Doc McStuffins across Europe this summer. The toy line includes dolls, plush, roleplay, and playsets developed by Just Play. The range, which will see products come to market as early as this Easter in some markets, will also see GP Toys develop and manufacture its own Doc McStuffins toys as well as distributing the Just Play line.

“Diaper Dude was born from the idea that men don’t have to lose who they are when they become a dad,” said Chris Pegula, founder, Diaper Dude. “And because many guys identify so closely with their favorite baseball team, the association with MLB is a perfect marriage—one that will give dads the opportunity to support their favorite team while also supporting their new—or growing—families.”

The MLBP agreement is the second licensing deal for this brand. Recently Diaper Dude came to market with a line of Yellow Submarine bags and accessories, bringing the timeless appeal of The Beatles to a new generation of fans. The brand also recently partnered with Boba, Inc., the baby carrier company, to create The Special Edition Diaper Dude Boba Carrier.

41 Entertainment (41e) and its UK agent, Lisle International announced that they have secured three new UK deals for apparel and publishing for the Pac-Man and the Ghostly Adventures property. The TV series is slated to begin broadcast in English-speaking markets in fall 2013 including Disney XD in the U.S., SKY in the UK, and TEN Network in Australia followed by a number of other key markets in late 2013 and spring 2014 supported by a licensing and merchandising program.

Blues Clothing will launch a range of products including both children’s and adult wear for fall 2013. Titan Publishing will produce a stand-alone Pac-Man and the Ghostly Adventures magazine fully packed with favorite Pac-Man characters. In addition, Pedigree Books will publish a 2014 annual to be released in August 2013.