In addition to the classic ask-and-shake feature, new features for Magic 8 Ball include: share your answers with friends and family on social media, daily notifications, and an Out of Questions feature where the app prompts users with notifications in the form of daily thought-provoking questions. Magic 8 Ball will be available as a free download from the Apple Watch App Store and App Store on iPhone beginning April 24.

Itochu in Deal with Psycho Bunny

The partnership with ITOCHU follows recent announcement of three new licensees for Psycho Bunny, including Leg Resource, Inc., (hosiery), S3 (footwear) and JRM Accessories (headwear), all of which will be introducing products to consumers in the fall. 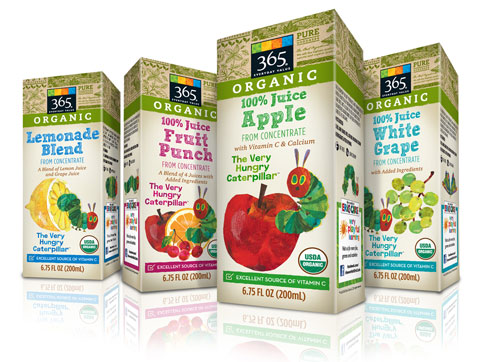 The Joester Loria Group has brokered a deal on behalf of The World of Eric Carle with Whole Foods Market to create a series of 365 Everyday Value juices featuring Carle’s signature artwork. The juice program is the second collaboration between the two brands. Earlier this year, Whole Foods debuted new packaging for nine varieties of 365 Everyday Value children’s cereals prominently featuring Carle’s characters, artwork, and content.

New Licensees for Little House on the Prairie

With the recent introduction of a licensing program inspired by the stories of Laura Ingalls Wilder, Knockout Licensing, the agency managing the brand’s licensing program in the U.S. and Canada, announced the addition of Andover Fabrics and The Queen’s Treasures to the Little House on the Prairie merchandise program.

Andover Fabrics has been granted rights to create and market Little House on the Prairie fabrics for quilting. The Queen’s Treasures has been granted rights to produce and sell doll houses and doll accessories (including clothes and furniture) for 15-inch and 18-inch dolls as well as a Laura Ingalls’ 18-inch doll and a doll wagon, inspired by Little House on the Prairie characters and settings.