Saban Brands (SB) announced the launch of an Advisory Committee for its Lifestyle Group that will be dedicated to providing counsel for the company on its current brands and future acquisitions. The committee will meet quarterly and will be comprised of industry executives who will provide insights, guidance, and strategic input into Saban Brands Lifestyle Group (SBLG) and its growing portfolio of fashion and lifestyle properties.

Mona Bijoor will be the first member appointed to SBLG’s Advisory Committee. Bijoor is founder and CEO of JOOR, a digital wholesale marketplace that connects apparel brands with more than 100,000 retailers worldwide. She will assist Saban Brands in expanding its global network and provide industry expertise in the fashion and lifestyle brand management space. Her wide range of industry experience includes working with Neiman Marcus, Lord & Taylor, and Harrods; as well as fashion labels including Michael Kors, rag & bone, and Phillip Lim. Bijoor also has experience working in-house at Ann Taylor, Chanel, Elie Tahari, and more. 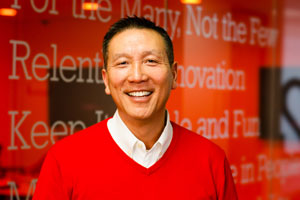 Fuhu, Inc., the creator of the nabi tablet, has appointed Douglas Woo to the newly created position of COO. Woo has served as president of Fuhu’s Smart Display division since 2013, where he was the chief architect behind nabi Big Tab HD and nabi Pass, Fuhu’s first-of-its-kind subscription service created specifically for kids to provide unlimited access to learning with Wings, an offering of mixed media content—from movies, television shows, and short-form videos, to apps, games, e-books, and music—for one low monthly price.

Woo brings more than two decades of senior management experience in the consumer electronics industry to the position. Woo was president of Westinghouse Digital Electronics. Prior to that he was an executive with high-resolution display maker Princeton Graphic Systems, Inc., and MAG Innovision, Inc., and a partner with the international law firm Pillsbury Madison & Sutro.

In addition, Fuhu announced the hiring of Rob Palmer as its new chief creative officer. Palmer brings to Fuhu world-class advertising experience, having led teams at Wieden+Kennedy, Goodby, and most recently Razorfish in developing and orchestrating campaigns for iconic brands as Apple, Coca-Cola, ESPN, and eBay. At Fuhu, he will be developing and overseeing creative vision and strategy as well as building a high-caliber internal advertising agency designed to support the company’s explosive growth.

Palmer’s work has contributed to a number of iconic advertising campaigns such as Tiger Woods “Hackeysack 2” and Nike’s “What Are You Getting Ready For.” He launched iMac Colors within “Think Different,” “Videogame” for Coca-Cola, and ESPN’s “This Is SportsCenter,” which became a Harvard Case Study. His work has garnered awards including Cannes Lions, CLIOs, and One Show Pencils. He also has an Emmy and the MTV Moonman.

4K Media, a wholly owned subsidiary of Konami Digital Entertainment, Inc., has named Jonitha Keymoore as its director of program sales. Based in the company’s New York office, Keymoore will report to senior vice-president of operations and business and legal affairs, Kristen Gray and is charged with responsibility for all broadcast and home video licensing for the company.

Most recently, she was director of acquisitions at Cinedigm. Previously, she was with Viacom International Media Networks, where, as manager of program sales operations, she was responsible for global sales of syndicated MTV, Nickelodeon, Comedy Central, BET, Logo, and VH1 programs. Keymoore began her sales career at Broadway Video, where she developed new partnerships for the Saturday Night Live property.