Shopkins Toys from The Bridge Direct

Moose Toys’ Shopkins has signed a licensing agreement with The Bridge Direct for a line of construction and activity toys, which are now available. The Shopkins C3 Kinstructions line lets kids build the world of Shopkins with multiple-piece construction sets that are compatible with all major construction brands.

The Shopkins C3 Kinstructions line will be available only at Toys “R” Us, while the activity toys will be offered at retailers nationwide. 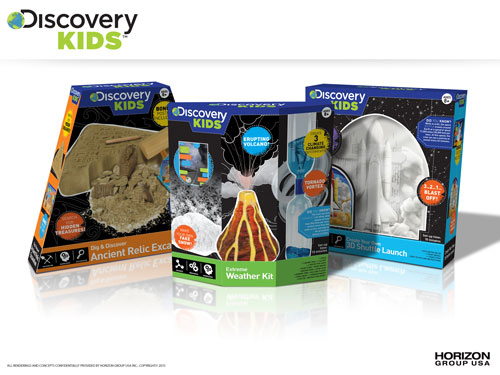 Discovery Consumer Products announced a partnership with Horizon Group USA for a new product line under the Discovery Kids brand. Horizon Group USA is currently developing a broad array of science, craft, and magic activity kits, which are expected at retail in 2016. The line will debut with offerings for Create Your Own, Build Your Own, and Learn and Discover sets including a 3-D shuttle launch, DNA build kit, ancient relics excavation kit, crystal growing kit, and more. The MSRP is $2.99–$49.99, and is targeted at children ages 6–11.

Stephan Baby has been granted multi-category licensing rights to The Rainbow Fish book series in the United States and Australia. Stephan Baby’s first product launch, which is scheduled for late spring 2016, will include plush, some apparel and accessories, gift sets, melamine, and ceramic banks. RJM Licensing, Inc., brokered the deal on behalf of NorthSouth Books, The Rainbow Fish book publisher.

The Rainbow Fish book series, which was originally published in 1992, has sold over 30 million copies with an upcoming 25th anniversary in 2017. To celebrate the 25th anniversary, a new book will be published, a costume character will visit many venues, and several promotions will be announced. Additional categories available for licensing include bedding/room décor and stationery and craft items. Distribution for this program is the mid-tier and high-end market.

Genius Brands International and its wholly owned subsidiary, A Squared Entertainment, the global licensing agent for apparel and lifestyle brand Psycho Bunny, announced that it is collaborating with Neroli Group S.A., Psycho Bunny’s core Latin America sportswear distributor in Latin America, on the launch of the brand’s flagship retail store in Panama City.