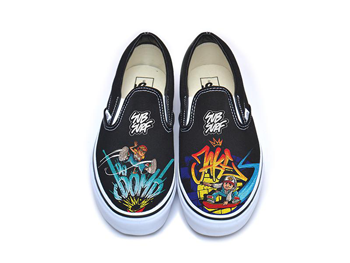 SYBO Games partnered with The Ave LA to create a limited edition Subsurf Vans collection, based on the Subway Surfers, the most downloaded mobile game of 2017.

The Subsurf collection features customizable slip-on and high top versions of Vans sneakers with exclusive artwork inspired by the franchise. SYBO will premiere the footwear and more at a giant Subway Surfers Venice Beach Party this Friday, June 1, which coincides with the debut of the new Subway Surfers animated series launch on YouTube. To find out more about the collection and the Venice Beach launch party, click here.

MGA Entertainment, owners of Num Noms, in cooperation with Integrity Vitamins & Supplements announced the launch of Num Noms Vitamins for children and adults. The initial Num Noms vitamin line will include multi-vitamin, vitamin C, probiotic, and prenatal products and will be available online and at major retailers including mass merchants, grocery, and drug channels beginning this fall.

Integrity Vitamins gummy vitamins are all natural, plant based products made without gelatin, dairy or gluten and are allergen-free, vegan and certified kosher and halal and taste great.

The new line will include Zak’s Funtastic Tumbler that features a fully-sculpted Hatchimal on the top as well as divided plate and flatware. Zak is also releasing a 16-ounce water bottle with a push-button pop-up drinking spout.

All of the items in the line are BPA-free.