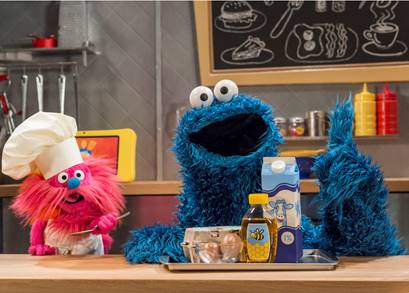 Sesame Workshop has teamed up with Tiny Pop to debut a brand new show in the UK next week. Cookie Monster’s Foodie Truck teaches kids where their favorite foods come from. In each five-minute episode, Cookie Monster and his pal Gonger receive a video call from a child who orders a favorite dish. Partway through preparing each recipe in their fully-loaded food truck, Cookie and Gonger realize that they’re missing a key ingredient. They jump behind the wheel and leave Sesame Street to gather the missing ingredient right from the source.

“Sesame Workshop has always approached familiar topics in fresh and creative ways, and we’re excited to continue this tradition with our newest series,” says Ed Wells, senior vice-president and head of international media and education, Sesame Workshop. “We are thrilled to be working with Tiny Pop, one of the UK’s leading kids’ channels, to take kids on fun, informative and laughter-filled trips to places like cocoa plantations, pasta factories, avocado farms and much more, to help kids discover where some of their favorite foods are grown and produced.”

Licensing opportunities for Cookie Monster’s Foodie Truck and Sesame Street are overseen by Bulldog Licensing, which was named Sesame Workshop’s agent for the UK and Eire in July.

On the heels of its summer collaboration, Discovery and vineyard vines have expanded their partnership with a new Shark Week holiday collection. The new product additions include T-shirts, long-sleeved shirts, and hats with holiday-themed Shark Week imagery.

Launched in May, the initial collaboration celebrated the 20th anniversary of vineyard vines and the 30th anniversary of Shark Week, the long-running summer tent pole event, with more than 40 exclusive Shark Week products including apparel, neckties, headwear, swimwear, towels, beach totes, and drinkware.

The collection is available now at vineyard vines stores and online.