Mego Corporation, the original action figure toy creator, has acquired a license to create new action figures from the SECRET VAULT of Stan Lee. The agreement with Stan Lee’s POW! Entertainment enables Mego to unveil never-before-seen characters created by Stan Lee, which will roll out later this year as part of the Marty Abrams Presents Mego action figure toy line.

At the time of his passing, the legendary comic book creator had produced characters that have never been released. This led to the agreement as a way to fittingly showcase some of Stan’s greatest unseen creations. Once introduced, the new characters will take the shape of three-dimensional action figure toys developed by Mego Corporation. The return of Mego Corporation in 2018 enables the company to revisit a partnership that initially commenced with Lee in 1971.

Originally founded in 1954, Mego Corporation re-entered the toy industry last year with its iconic characters from Star Trek, DC Comics, I Dream of Jeannie and more across television, music and film brought back to life as action figures. The most recent Joe Namath action figure signifies the 50th anniversary of “Broadway” Joe’s brash guarantee of victory over the heavily favored Baltimore Colts in Super Bowl III.

Stan Lee’s POW! Entertainment is a multimedia company founded in 2001 by Stan with his friend and business partner Gill Champion, its president. The company has been and will continue to be the guardian of Stan Lee’s legacy, and is excited to roll out new projects and adventures Stan had been working on.

“Stan Lee’s inspiring legacy leaps into the future. This is another example of things to come from Stan’s POW! Entertainment. We are thrilled to be working with a legendary action figure brand such as Mego Figures,” says Scott D. Williams, CEO of Stan Lee’s POW! Entertainment. “We are set for the future to reveal these new stories and characters to the world in true Stan Lee fashion.” 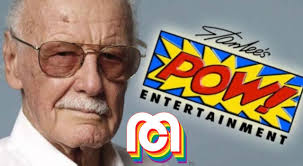