Mattel Appoints New Members to Board

Adriana Cisneros, CEO of Cisneros Group of Companies, and Roger Lynch, president and CEO of Pandora Media, have been elected to Mattel’s Board of Directors, effective immediately.

“As we continue to transform Mattel into an IP-driven, high-performing toy company, we are also taking action to further strengthen and develop our Board of Directors,” says Ynon Kreiz, chairman and CEO of Mattel. “Mattel and its board will benefit immensely from Adriana’s and Roger’s unique, valuable experience in key business areas including digital content, social media, online marketing and technology. Adriana and Roger are proven leaders, with extensive experience managing complex, multi-national, consumer-facing organizations in rapidly-evolving industries and geographies.”

Cisneros brings extensive global business, media and entertainment experience to Mattel’s Board. Cisneros currently serves as CEO of Cisneros, a global enterprise focused on media and entertainment, digital advertising solutions, real estate and social leadership. Previously, Cisneros served in a variety of leadership capacities within the company, including vice chairman and director of strategy before assuming the role of CEO. She also serves as president of Fundación Cisneros, a not-for-profit organization dedicated to improving access to education in Latin America. She is also director and executive committee member of the Board of the International Academy of Television Arts & Sciences, a trustee of the Paley Center for Media, and co-chair of Endeavor Miami, an organization dedicated to promoting high impact entrepreneurship. Cisneros is a member of the Latin American Acquisitions Committee of the MoMA in New York City. Chosen as a Henry Crown Fellow by the Aspen Institute, Cisneros also served as a term member at the Council of Foreign Relations (2011–2016). She earned a Bachelor’s Degree from Columbia University, and a Master’s Degree in journalism from New York University. She is a graduate of Harvard Business School’s Program for Leadership Development (2010).

Lynch is a recognized leader in the digital entertainment and content delivery industries, serves as president and CEO of Pandora, the streaming music provider. Prior to joining Pandora in 2017, Lynch served as the founding CEO of Sling TV Holding, the streaming television service of DISH Network that delivers live sports, news and entertainment to broadband-connected devices. Prior to that, he served as executive vice-president, Advanced Technologies of DISH, from 2009 to 2012.
Earlier in his career, Lynch was chairman and CEO of Video Networks International, an internet protocol television provider in the U.K. While at Video Networks, he won an Emmy for Scamp, an on-demand children’s channel, and a BAFTA for V:MX, a collection of on-demand music video channels. He also served as president and CEO of Chello Broadband N.V., a broadband internet service provider with operations in 10 European countries. Prior to Chello, Lynch was an investment banker with Morgan Stanley. Lynch began his career as a Member of the Technical Staff (Physics) at the Hughes Aircraft Company. He is currently a member of the Board of Directors of Pandora, and the Board of Overseers of the Tuck School at Dartmouth College. Lynch earned a Bachelor’s Degree in Physics from the University of Southern California, and an MBA with highest distinction from the Tuck School of Business at Dartmouth College. 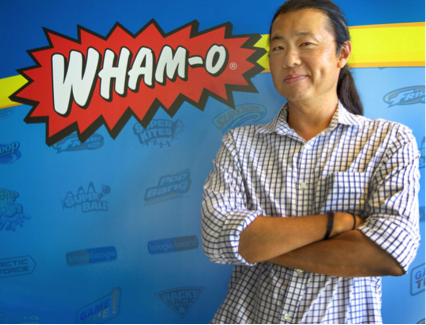 David Huang joins the Wham-O team as the director of product design and development.

At Wham-O, David will be responsible for the creation and development of innovative toys and products that reflect the Wham-O culture of outdoor fun.

Previously, Huang worked as the director of design and product development at Maui Toys for more than five years. During that time, he helped introduces a number of popular toys, including the Skyball, Sky Bouncer, and the Wave Hoop. Along with his team at Maui Sports, Huang also won the CNBC Sports Toy of the Year in 2010, Walmart Top 10 Toys in 2009, Target’s Top 10 Toys in 2009, and more. A graduate from California State University, Long Beach with a B.S. in Industrial Design, Huang has spent 13 years gaining valuable experience and honing his skills on product design and development from various companies, especially in the toy industry.

During the weekends when David is not working on his latest inventions or designs, he works at a non-profit organization teaching the police force and secret service agents to drive safely at high speeds or pursuits.