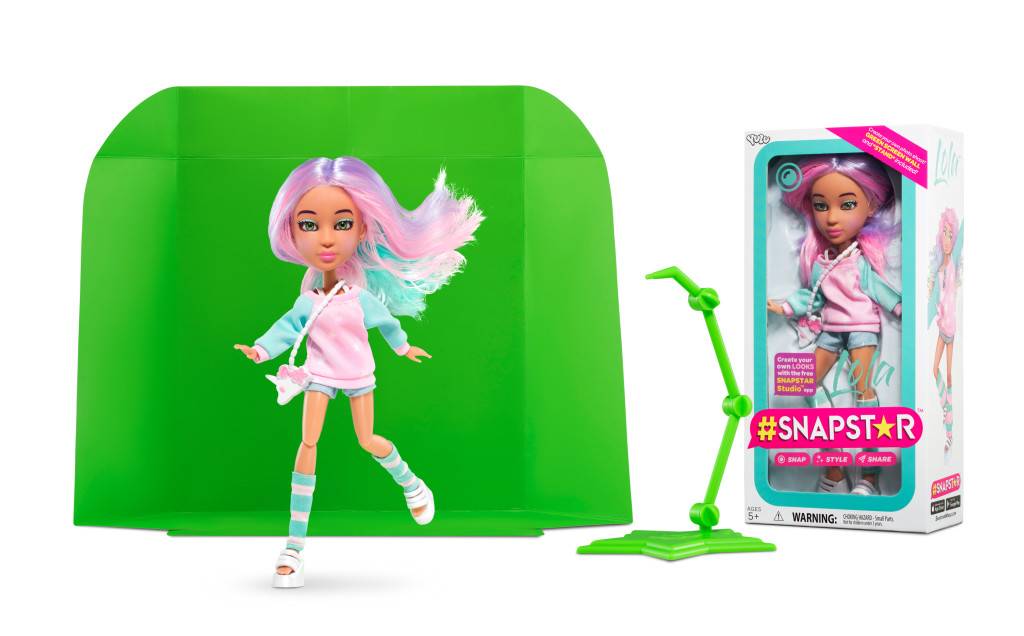 As some toy and game brands are starting to show their age, new toy manufacturers are challenging old formulas and better utilizing digital to reinterpret beloved products like fashion dolls in new ways.

Yulu, the international toy maker founded by Dutch college friends Jochem van Rijn and Thijmen de Schipper, is already known for bringing innovation to the games aisle with its social share-worthy skill-and-action games such as Watermelon Smash, Spy Code, and Tic Tac Tongue. Now the toymaker hopes to apply the same innovative approach to dolls with its new line, #Snapstar.

Launched in January exclusive to Walmart, the line will extend to Target and other retailers this fall.

“#Snapstar is a completely new take on the fashion doll category,” says Yulu’s co-president van Rijn. “There are six gorgeous dolls/influencers in the line—Dawn, Echo, Aspen, Lola, Yuki, and Izzy—each with her own personality, style, and aspirational career relevant to today’s tweens.”

Each doll features 15 points of articulation and includes one outfit, accessories, a cellphone, and interchangeable wigs. But the big features that differentiate the line in the doll aisle are the included green screen and green doll stand.

“The green screen and stand are what allow for literally countless shots to be photographed without seeing the stand, helping to bring the world of #Snapstar to life,” says van Rijn. The #Snapstar Studio App lets tweens customize and design their dolls, change their hair and makeup, add accessories and backgrounds, and create their own photo shoot. They can also save, share, and post on social media.

This is key to Yulu’s marketing strategy, which will include a robust social media-, digital-, and YouTube-focused community engagement program, alongside traditional TV and PR. “Tweens now thrive in a world where their digital persona is as important as their real-world persona,” says van Rijn. “#Snapstar is the perfect combination of classic doll play patterns combined with how kids are using social media and their phones and tablets today.

“You could argue that over time physical dolls have lost some play relevance as tweens migrated to more digital forms of entertainment and communication. This line allows the physical doll to still carry and create imaginative story lines, but it also give kids the opportunity to bring their dolls into their own digital lives. Tweens can even make their doll, and themselves, social media influencers.”

The influencer marketing industry has exploded thanks to Instagram and global ad spending on influencers is expected to reach $5–10 billion by 2020 according to Later, a top Instagram scheduler and social media platform. Yulu is already capitalizing on this by creating Instagram accounts for each doll, updating followers on where the dolls have been and what their busy lives are all about. This thereby engages kids to not only become part of this lifestyle but also provides inspiration for tweens to use as they add to the story with their own dolls.

“We’ve developed these stories to get consumers involved with more than just purchasing the product; they are purchasing the whole story and lifestyle of the dolls,” says van Rijn. “We wanted to launch something that is completely unique and on trend, so we decided to go after a market that has not seen growth or innovation in some time. We believe that with #Snapstar we are delivering an extremely fresh approach to the doll play pattern that in today’s tween world of YouTube and social engagement will connect with fans in a way they can relate. We truly believe this brand will help secure us a spot as a major player in the toy industry.”

In addition to the #Snapstar line, Yulu will continue to bolster its position in the games and outdoor toy spaces with new products, while also stepping into other new—and competitive—categories, such as collectibles. Here, Yulu will launch its new PopPop Pets and PopPop Snotz.