Laurie Leahey: What is Pawparazzi Pets?

Sharon Bennett: Pawparazzi Pets is a line of miniature plush dogs and cats with celebrity personalities that mimic the lifestyles of the rich and famous. The characters have very well-developed personalities. They’re actors, musicians, writers, singers, and athletes. Noodle Head just launched Woofgang Pug, who is a celebrity chef.

It’s a unique property because there are multiple components that appeal to girls. It is well-developed characters with back-stories, celebrity, fashion, and collectibility.

S.B.: Planet Pawparazzi is an interactive world where girls learn and play with the pets. There are games, music, blogs, and lots of different activities. It’s really natural as a brand extension. There’s so much content with the characters and the back-story, we thought that this would be a good way to showcase that aspect of the brand, as well as to support it and extend it into other areas.

We’ve really gotten a lot of great feedback from launching the website. Now video game companies are interested in the content and publishers are excited about it. It’s really just expanded the opportunities to extend this brand into other areas of merchandise.

L.L.: Have any licensing deals been signed since the website launched? 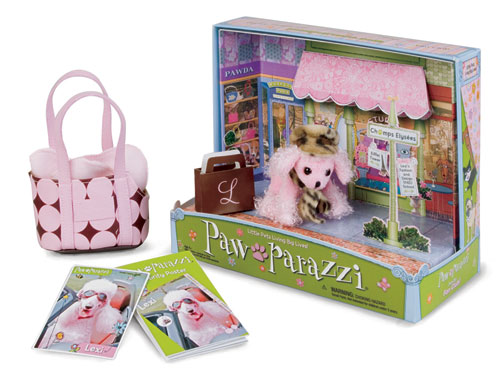 S.B.: We have an agreement with Parachute Publishing for a wide range of books. We just signed a deal with StickerYou, an online custom sticker site. What we’d like to do from a licensing perspective is to really establish the brand at mass and then really go full force into licensing.

L.L.: Pawparazzi Pets has been in the specialty market and at high-end retailers, such as Kitson and Neiman Marcus. How will Noodle Head transition the brand to mass retailers?

S.B.: We’re expanding the line to mass starting with Toys “R” Us at the end of this summer. It’s a revised product line with a more affordable price point, but it still maintains the high level of detail, quality, and play value. There are some new characters being introduced that might be exclusive to mass. There will be slightly different packaging and content, but the product line will be one cohesive statement. Toys “R” Us has been intimately involved in helping develop the direction for mass market.

L.L.: Is there a timeline as to when you hope Pawparazzi Pets will be fully established at mass and the licensing program can begin?

S.B.: We hope that once product launches at Toys “R” Us—and we’re in discussions with many other mass merchants, as well—we’ll have other licensing partnerships to announce by the end of the year. We plan to extend the brand into publishing, video games, interactive, fashion apparel, dress-up, social expressions, other toy items, home décor, and also categories that support collectibility. There’s a big collectible component that the girls embrace, so we will replicate that with our licensing partners. We also hope to do entertainment at some point in the future.