My1story is a kid-friendly adaptation of the world’s most renowned characters and stories such as Little Red Riding Hood, Jack and the Beanstalk, and Humpty Dumpty. It will be developed into a comprehensive licensing program, animation, and website. Its founders are part of Snap Global Solutions, which is a design and manufacturing company with offices in the U.S., Hong Kong, and Vietnam.

Nancy Lombardi: Describe My1story. Where did the idea come from? How long has it been in development? What are your goals for the property?

Ricardo Venegas: My1story is a kid-friendly adaptation of the world’s most renowned characters and stories. The idea for my1story began when we decided to expand into intellectual property ideation. My colleague, Jaime Rodriguez, and I chose to develop a property that we’d share with our children. We came across some of the classics—such as Little Red Riding Hood, Jack and the Beanstalk, and Humpty Dumpty—and realized that they were actually quite violent and visually unattractive. We redrew the characters to give them a more appealing look in the eyes of today’s children and their parents. Then we came up with My1story as a way to position these, and countless other characters, under one comprehensive brand that over time will be the place where consumers come to find their favorite classic characters.

Our goal is to develop My1story into an evergreen children’s entertainment property with an extensive licensing program, animation, and a website to support its expansion and longevity.

N.L.: What type of licensing program are you looking to develop? Have you signed any licensees? When do you expect product to be in stores?

R.V.: We’ve identified several key categories for the initial phase of our licensing program: publishing, toys, home décor and bedding, softlines, and party goods. We are currently signing licensees in international markets. We are in deep discussions with several North American companies as well. The expected launch at retail is either fall 2012 or spring 2013. 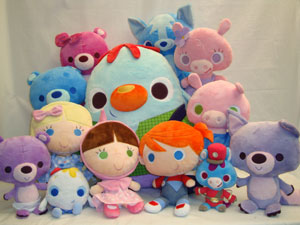 N.L.: What types of retailers do you expect to carry the line? What trade shows, if any, have you been attending to get the word out?

R.V.: We believe that retail buyers will recognize that My1story’s eye-catching graphics, along with the awareness associated with these characters and stories, will capture the hearts of kids, parents, and grandparents at retail. Our booth at the 2011 Licensing Show really brought forth attention to the brand and our efforts. With licensees coming on board we expect to be back at Licensing Show 2012, then followed by ABC Kids Expo, and New York Toy Fair.

R.V.: I am the CEO of Snap Global Solutions. We are a design and manufacturing company with offices in the U.S., Hong Kong, and Vietnam. We provide turn-key design and manufacturing solutions for companies such as The Walt Disney Company, Universal Studios, DreamWorks, Paramount, Nickelodeon, and more. In addition, I am now president and co-founder of My1stStory. I am a former Disney Consumer Products executive responsible for business development throughout Latin America.

Jamie Rodriguez is the creator and co-founder of My1stStory. He was an executive at Disney Consumer Products Latin America in Miami where he was responsible for character art and product development. Following Disney he joined Snap Global Solutions to develop toys and entertainment. In addition, he has worked for various companies including The Disney Stores, Disney Theme Parks, Nickelodeon, Fox, Warner Bros., and Discovery Channel.