film series based on the vampire romance novels, was named License of the Year at the Opening Night Awards Ceremony at Licensing International Expo 2010 in Las Vegas. In addition, licensing programs supporting the Twilight property were honored in the entertainment and retail awards categories.

In all, LIMA presented 16 International Licensing Excellence Awards recognizing the best and most successful licensed properties and products in seven categories: art, character/toy, corporate, film/television/celebrity/entertainment, sports and sports-themed entertainment, promotion, and retailer. Nominations were solicited from across the licensing industry and winners chosen by a vote of the LIMA membership.

All awards are based on calendar year 2009. The winners, by category, are:

Following the awards presentation, the licensing industry honored the lifetime achievements of licensing industry pioneers Alan G. Hassenfeld and the late Stephen Hassenfeld of Hasbro. Among the first to recognize the impact toys and games could have in telling a story, the Hassenfelds built the company into a top toy licensing partner for many brands, and many of Hasbro’s own brands have become licensing programs in their own right. Noted for their philanthropy, the Hassenfelds have been involved in hundreds of charitable and social causes through the Hasbro Children’s Foundation and other endeavors.

For the seventh consecutive year, LIMA selected the Children’s Brain Tumor Foundation (CBTF) as its charity of choice. The foundation works to improve the treatment, quality of life, and long-term outlook for children with brain and spinal cord tumors. All proceeds from sales of a special tribute book honoring the Hassenfelds and the Licensing Excellence Awards nominees were donated to the CBTF.

CBS Consumer Products announced that it will represent properties from sister company Showtime Networks for merchandise and live events. In conjunction with the premium network’s licensing team, CBS Consumer Products will build upon the merchandising programs for top Showtime properties including Dexter, Weeds, Nurse Jackie, Californication, The Tudors, The Real L Word, Showtime Sports, and the upcoming series The Borgias.

FremantleMedia has partnered with Australia Zoo and Terri, Bindi, and Robert Irwin to develop new opportunities in television and licensing globally. The agreement will see FremantleMedia appointed as the international multi-platform entertainment partner. FremantleMedia will be exploring global opportunities in television production, distribution, home entertainment, consumer products, live events, and digital platforms. Initial creative discussions have included new filming opportunities with Terri, Bindi, and Robert Irwin, as well as activity around existing brands Australia Zoo, Crocodile Hunter, Bindi the Jungle Girl, Wildlife Warriors, and The Steve Irwin Wildlife Reserve. The deal respects the rights of the current partners and provides a platform for future development of the brands globally.

Disguise has signed a new three-year agreement with Hasbro to produce Halloween costumes and accessories in conjunction with most Hasbro brands. The agreement grants Disguise expanded and exclusive rights to manufacture and distribute Hasbro-branded Halloween costumes and accessories to all channels in the United States and Canada beginning with the upcoming Halloween season. The agreement includes rights to produce Halloween costumes for all appropriate ages based on the Transformers 3 movie scheduled for release in summer 2011, in addition to Hasbro-inspired TV shows from Hasbro Studios such as G.I. JOE and My Little Pony that will air this fall on The HUB, the Hasbro and Discovery Communications joint-venture cable television network. 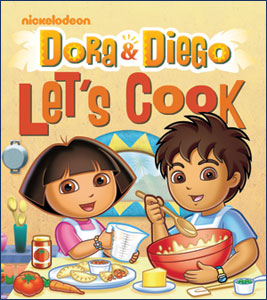 Just in time for the 10th anniversary of Dora the Explorer, Nickelodeon Consumer Products and Wiley announced that they will release Dora and Diego Let’s Cook. A cookbook designed to get kids safely exploring and learning in the kitchen, Dora and Diego Let’s Cook will teach kids to make 50 health-minded recipes while learning Spanish along the way. Arriving on bookshelves this August and retailing at $16.95, this marks the first Dora and Diego branded cookbook—and the first of two Nickelodeon-branded children’s cookbooks planned under the partnership. A SpongeBob cookbook is in the works for fall 2011.

A new licensed product line was unveiled by Coca-Cola and Paramount Licensing, which have joined forces on a family-targeted holiday merchandise program capturing the uplifting sprit of It’s a Wonderful Life and the nostalgic warmth of Coca-Cola. The products are part of a major holiday 2010 and 2011 retail push with specialty, drugstore, department store, and mass market retailers.

The product line features specially created artwork celebrating the upcoming 125th anniversary year for Coca-Cola and the 65th anniversary year of the film. The line includes the tag line “Enjoy Coca-Cola—It’s A Wonderful Life!” The artwork evokes the vintage feel and holiday warmth of the film and draws on iconic elements from the motion picture, including the Bailey family, the town of Bedford Falls, and Gower Drugs, where Coca-Cola was prominently featured in several scenes in the film.

Global licensing agency Gator Group and fashion brand Paul Frank Industries announced that, after a successful transition from manufacturing into licensing, the two companies have ended their worldwide agency representation agreement. In 2007, Paul Frank and Gator Group began discussions to transition the Paul Frank brand’s manufacturing and direct sales operations to a fully licensed business model. After more than two years of partnership and the successful positioning of the brand throughout the world, it made sense for both parties that Paul Frank Industries take back the responsibility for leading the company’s operations, as well as licensee and retail management.