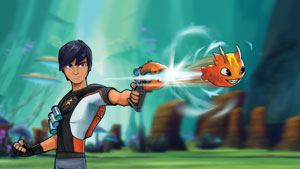 DHX Media entered into an agreement to acquire Vancouver-based Nerd Corps Entertainment, Inc., and its subsidiaries for approximately $57 million. The transaction is anticipated to close by December 24, 2014.

The acquisition increases DHX’s operating leverage, adding Nerd Corps’ animation studio in Vancouver, B.C., which features five lines of production, as well as Nerd Corps’ interactive apps, gaming expertise, and licensing opportunities with Nerd Corps’ brands. The transaction brings more than 200 half hours of proprietary children’s content to DHX’s library, including the comedy adventure series Slugterra, which has been broadcast in more than 150 countries and is a popular title on Disney XD in both Canada and the U.S. The deal includes licensing and distribution rights for all proprietary Nerd Corps series. The acquisition will increase DHX’s staff level in Vancouver from approximately 300 to 700 personnel.

“Nerd Corps has an outstanding reputation and track record for high-quality animation, and we believe this is a perfect fit for DHX Media – one that will add significant value and expertise,” says DeNure. “We look forward to having Ace, Ken, [and] the rest of the Nerds on our team.”

The International Licensing Industry Merchandisers’ Association (LIMA), in association with the University of California Los Angeles (UCLA) Extension, will offer a dedicated course for licensing industry professionals for the first time. The 12-week course, Licensing Entertainment: Strategies for the Global Marketplace, will be held at UCLA on Tuesday evenings from January 6 to March 24, 2015. The new course will be led by licensing and marketing veteran Kenneth K. Markman, CEO of KKM Global Brand Strategies, who has also held senior marketing posts at Universal Studios, 20th Century Fox, MTM Entertainment, J. Walter Thompson Advertising Agency, and Mattel.

The course will offer a 360-degree view of licensing as a brand extender and financial enhancement to a property and a business’ bottom line. Markman will lead sessions on how retailers, licensees, licensors, and consumers exert influence, financial outcomes, and creative control; the ways consultants maximize brand-centric franchise-driven strategies; the power and potential of an expanding international marketplace; and how media platforms, technology, and consumer habits influence purchase and behavior.

Imports Dragon, one of Canada’s largest toy distributors and manufacturers, has partnered with DHX Media to celebrate the 25th anniversary of Caillou.

Throughout the remainder of 2014 and through 2015, Imports Dragon and DHX will host birthday parties and events across North America to celebrate Caillou’s 25th anniversary. Imports Dragon released new Caillou product with specially designed packaging to mark the celebration.

Painting Lulu, a new coloring book company that bridges the gap with the digital world, has appointed a management team to promote and execute licensing for the property. Painting Lulu tapped ChizComm Ltd. to handle its marketing and communications initiatives, while Perpetual Licensing was appointed to manage its license acquisitions.