‘Eat This, Not That!’ Magazine Hits Newsstands 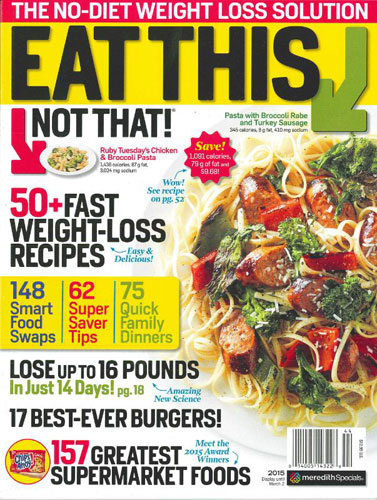 Meredith Corporation and Galvanized, LLC launched the Eat This, Not That! magazine, the first-ever, stand-alone newsstand product for the brand. The magazine is now available in more than 80,000 newsstand pockets nationwide.

Eat This, Not That! magazine is based on the bestselling book franchise by David Zinczenko and coauthor Matt Goulding, which has generated 16 titles and sold more than seven million copies since its debut in 2007.

Since acquiring the Eat This, Not That! franchise in September, Zinczenko and Galvanized have been working to relaunch the brand across multiple platforms, including a redesigned website (launching later this month), mobile applications, a quarterly digital magazine, and two new books available in the first half of 2015.

The Wildflower Group will initially focus on three main categories: food & beverage, exercise equipment and accessories, and supplements and wellness items. The new merchandise will be sold at mass market, specialty, and health stores nationwide.