American Girl will debut an all-new custom doll and apparel-making experience online and at its flagship retail locations beginning August 8. For the first time, fans can now customize and design their own Truly Me doll from head to toe, along with doll- and girl-sized apparel, using American Girl’s new Create Your Own online experience. Using the new online tool, fans can design their custom American Girl doll from an array of never-before-released choices and more than one million design combinations.

Design options will include face molds, skin tones and freckles, eye and hair colors, hair textures, new cuts and styles as well as special extras such as earrings, hearing aids, glasses or sunglasses, and braces. To complete the personalization, girls can choose from one of six exclusive outfits and accessory sets specifically created for their One of a Kind dolls. The collection includes a personalized keepsake box, a certificate to create a custom doll T-shirt, and a free six-month subscription to American Girl magazine. Pricing for the entire assortment is $200 and includes free shipping.

Beyond the custom doll, girls can also use the Create Your Own experience to design their own One of a Kind doll outfits and girl-sized products. The six design options include a doll tunic and leggings, a doll dress, a doll sport set, a doll tee, a girl tee, or a girl backpack. And, with a vast selection of themes, colors, patterns, and prints to choose from through the Create Your Own online tool, girls can tailor their creations.

The new premium experience will go live on August 8, 2017, at americangirl.com/createyourown and at American Girl’s flagship retail locations in Chicago, New York, and Los Angeles.

“Our balance sheet and cash flows remain strong. While we are seeing some softness in economic conditions in Brazil and the U.K., our brands continue to resonate with consumers,” says Deborah Thomas, Hasbro’s chief financial officer. “We are well positioned with innovative new product driven by strong entertainment as we enter the second half of the year.”

Partner Brand revenues increased 1% to $230.0 million. Beyblade, DreamWorks’ Trolls, Marvel and Disney Princess grew revenues in the quarter. Star Wars is well positioned ahead of the September 1st on-shelf date for Star Wars; The Last Jedi merchandise. Marvel has a robust entertainment slate this year and both Marvel’s Guardians of the Galaxy Vol. 2 and Spider-Man: Homecoming contributed positively to the second quarter and have good momentum entering the second half of the year.

Emerging Brands revenue declined 14% to $62.9 million, primarily driven by declines in Playskool, Super Soaker, and Easy-Bake Oven products. Baby Alive revenues were down slightly in the quarter, primarily due to Brazil, but revenues are up in the first half.

Dividend and Share Repurchase
The Company paid $71.3 million in cash dividends to shareholders during the second quarter 2017. The next quarterly cash dividend payment of $0.57 per common share is scheduled for August 15, 2017 to shareholders of record at the close of business on August 1, 2017.

During the second quarter, Hasbro repurchased 6,100 shares of common stock at a total cost of $0.6 million and an average price of $94.99 per share. At quarter-end, $309.4 million remained available in the current share repurchase authorization.

“The decline in sales for the second quarter is attributable to several factors, including the consequence of suspending sales to one of our retail customers and the decline of several of our film-related licensed properties,” says Stephen Berman, Jakks Pacific chairman and chief executive officer. “Despite lower sales in Q2 and first half 2017 as we expected, we believe sales declines in the second half to be much more modest as we head into peak selling season.

“Our anticipated results are based on several new product lines that are performing well, especially Moana, Disney Princess and Nintendo products, which showed strong year-over-year performance. In addition to the expected continued performance of these product lines in the second half, we are also excited by many new innovative product introductions coming for the Fall, including properties from licensing partners (DC Superhero Girls, Nintendo Splatoon and new Disney products) as well as several proprietary product lines (Squish-Dee-lish, Pull My Finger, and Real Workin’ Buddies Mr. Dusty). In addition, our Disguise division has new Minecraft and LEGO licensed role-play and Halloween costumes adding to the excitement.

“We are particularly excited about additional new category introductions, including C’est Moi, our proprietary cosmetic brand for tweens which we expect to launch late in 2017, and a sporting goods line called Morf, an innovative, unique single platform in which you can balance, bounce, skate and scoot by easily switching out the wheels and handles. Morf is expected to launch Spring 2018. We are also looking forward with great anticipation to new licenses which we believe will enhance our sales performance in the fourth quarter carrying over to 2018.

“We are well poised for a profitable second half, when we will have milder headwinds on sales and strong tailwinds on costs. We have significantly strengthened our balance sheet, and have put in place a growing set of partnerships with leading entertainment companies that we expect to add to sales and boost margins in the second half of 2017 and beyond.

“We remain optimistic about the balance of the year in which we continue to expect full year Adjusted EBITDA and EPS to exceed last year’s performance despite an overall decline in sales for this full year.”

Gross margin in the second quarter 2017 was 28.2 percent, down from 31.8% last year as a result of deleveraging of fixed costs, shifts in product mix and closeout sales in certain categories.

Operating loss for the second quarter 2017 was $14.1 million, including the $2.3 million non-cash charge related to the accounts receivable write-down due to an online retailer no longer in business, compared to an operating loss of $1.1 million in the second quarter of 2016. While overhead declined in the quarter, operating income was impacted by the deleveraging of fixed operating costs on lower sales, lower gross margin and an increase in direct selling costs including marketing expenses due to Easter occurring in mid-April in 2017 versus in March 2016.

For 2017, the Company continues to expect higher net income, earnings per share and Adjusted EBITDA on lower net sales compared to 2016, excluding the non-cash bad debt charge. The Company expects improved profitability in 2017 principally in the second half to result from more efficient marketing, cost-containment efforts and a continued focus on building our base of evergreen brands and categories, as well as entering new categories, creating a strong portfolio of new and existing licenses, and developing owned IP and content.

During the second quarter, the Company exchanged and retired $12.0 million principal amount of its 2018 Convertible Senior Notes for $11.4 million in cash and 112,400 shares of common stock.

During the second quarter, the Company completed the sale of approximately 3.7 million shares of its common stock for $19.3 million in cash to an affiliate of its China joint venture partner.

Use of Non-GAAP Financial Information

In addition to the preliminary results reported in accordance with U.S. GAAP included in this release, the Company has provided certain non-GAAP financial information including Adjusted EBITDA which is a non-GAAP metric that excludes various items that are detailed in the financial tables and accompanying footnotes reconciling GAAP to non-GAAP results contained in this release. Management believes that the presentation of these non-GAAP financial measures provides useful information to investors because the information may allow investors to better evaluate ongoing business performance and certain components of the Company’s results. In addition, the Company believes that the presentation of these financial measures enhances an investor’s ability to make period-to-period comparisons of the Company’s operating results. This information should be considered in addition to the results presented in accordance with GAAP, and should not be considered a substitute for the GAAP results. The Company has reconciled the non-GAAP financial information included in this release to the nearest GAAP measures. 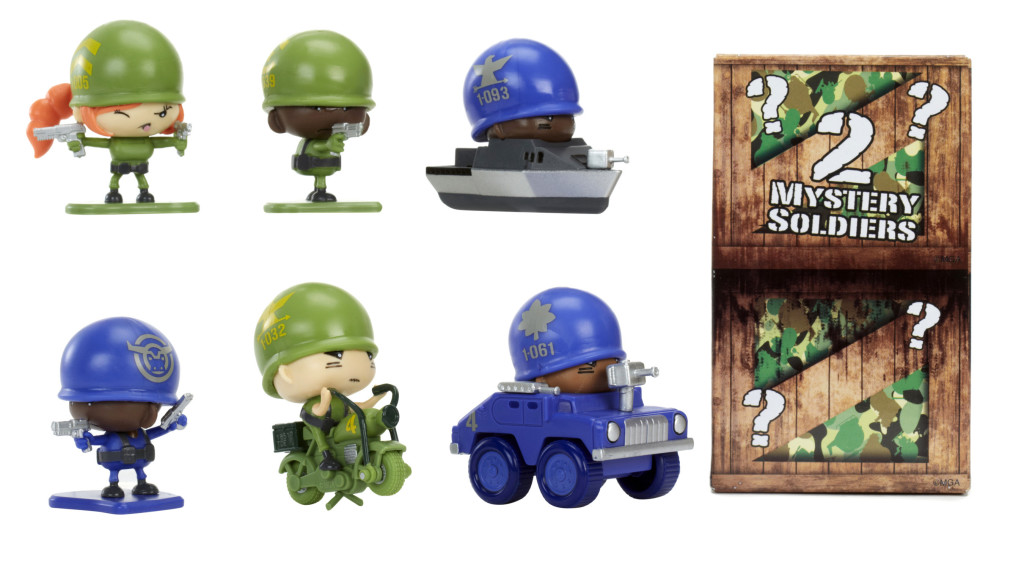 “Awesome Little Green Men is a fresh new take on little green army men, but raises the bar by infusing battle and game play with amazing new characters to collect,” says Isaac Larian, CEO of MGA Entertainment. “With our proven track record of creating successful collectible toys, we are excited to deliver an amazing new brand for kids to enjoy.”

With more than 100 unique characters to collect in Series 1, including four super rare figures in the green army and blue army, the new toy doubles as a game. General Pain and General Panic lead the troops, and the goal is to build the best squad in order to win the game. Each pint-sized character is a member of a special unit, and all have unique names such as Private Porkchop, Captain Obvious, Sergeant Swag.

Roblox to Payout $30 Million to Developers

Roblox Corporation is on track to payout $30 million to independent developers in 2017 fueled by its growth, which now boasts more than 56 million monthly players worldwide. The announcement was made at the start of the company’s third annual Roblox Developer’s Conference in San Jose, Calif., July 21-23. It signifies a significant acceleration in developer payouts over the past three years, which amounted to $2.5 million in 2015 and $5.5 million in 2016.

The rise in payouts is a direct result of Roblox’s rapid growth in monthly active players combined with a recent increase in payouts the company makes available to its user-generated community, a jump that lifted a maximum of $140,000 per month to $1,050,000 per month. This increase—extended to the more than 1.7 million and growing creators—will make it possible for two of the platform’s top developers to earn more than $2 million this year. Roblox’s top games are now making more than $100,000 a month.

The Roblox Developers Conference brought together hundreds of Roblox creators at every skill level and offered a weekend of panels, brainstorms, and in-depth discussions.