Founded in 2006 and based in Bath, Evil Corp is a design and animation studio that’s produced short animated product videos with Funko since 2014. In conjunction with the acquisition Evil Corp will now operate under the name Funko Animation Studios and founders Guy Thomson and Seth Watkins will stay on as general managers.

In 2016, Funko collaborated with Marvel Animation to create animated Marvel Funko shorts with story and animation by Evil Corp and executive production by Brian Mariotti, Dan Buckley, Cort Lane, Joe Quesada, and Alan Fine. The first collaboration, Spellbound, debuted in November 2016, featuring the characters of Iron Man, Spider-Man and Loki and has reached more than 1.1 million views to-date with subsequent Marvel Funko shorts garnering well more than five million views. The second season of Marvel Funko shorts have already premiered with an additional five shorts set to launch in late 2017 and into 2018.

Target Corp. announced it has agreed to acquire Shipt, Inc., the online same-day delivery platform, for $550 million in cash. Target will leverage its network of stores and Shipt’s proprietary technology platform and community of shoppers to quickly and efficiently bring same-day delivery to guests across the country. The acquisition significantly accelerates Target’s digital fulfillment efforts, bringing same-day delivery services to guests at approximately half of Target stores by early 2018. The service will be offered from the majority of Target stores, and in all major markets, before the 2018 holiday season.

At launch, Target will offer same-day delivery of groceries, essentials, home, electronics and other products, while expanding the products offered over time. By the end of 2019, same-day delivery will include all major product categories at Target.

Founded in 2014 and located in Birmingham, Alabama, Shipt is a rapidly growing membership-based grocery marketplace and same-day delivery platform. The service leverages an extensive network of more than 20,000 personal shoppers to fulfill orders from various retailers and deliver within hours in more than 72 markets. Shipt values a personalized, customer-first delivery experience that simplifies life and saves time for members. Through Shipt’s app, members are connected to local, reliable shoppers who help facilitate a quality delivery experience that is personalized, efficient and convenient.

Shipt will be a wholly-owned Target subsidiary, and will continue to run its business independently. It also plans to expand partnerships with other retailers seeking same-day, last-mile capabilities. All current Shipt employees will continue to be employed by Shipt and will work from their current offices in Birmingham and San Francisco. CEO Bill Smith will remain in his current role, and will report to Target COO John Mulligan. In addition to same-day delivery capabilities, Target will also leverage Shipt’s expertise as the company enhances and strengthens its supply chain, including integration with the recently acquired transportation technology company, Grand Junction.

The transaction is subject to customary closing conditions and is expected to close prior to the end of calendar year 2017. This all-cash acquisition will be immaterial to Target’s near-term financial results. It is expected to be modestly accretive to the company’s earnings per share in 2018, while accelerating digital and total sales growth over the medium term.

WIT will also recognize the Toys “R” Us President of Play, 11-year-old Ariana Gentry, with a special Wonder Girl Award for her toy expertise and organic passion for play.

The WIT Foundation Scholarship program will present seven scholarships to student recipients at related toy, engineering and licensing industry-focused programs at universities around the world.

The Lifetime Achievement Award celebrates an industry thought leader who personifies innovative and visionary leadership, and has made significant contributions to toys, licensing or entertainment. Norma Rosenhain is founder, owner and CEO of the Creata Group of companies, including Creata, a consumer marketing and promotional company; Centa IP, a global licensing agency; Ultimate Source, a global toy company; and Build a Bear Australia & Singapore. She has produced more than 15 billion toys and distributed to 120 countries over her accomplished career, spanning more than 30 years.

The Elise Lachowyn Mentorship Award was established with the support of Tech4Kids (now Basic Fun!) to recognize outstanding industry mentors for the impact they have had on the professional development and career advancement for those they mentor. Nancy Zwiers is the executive vice-president and global CMO for Spin Master, and throughout her 25-year career has served as a role model and mentor with a strong commitment to the advancement of women. She also mentors U.S. Foreign Service Public Diplomats, helping them communicate with youth around the globe. Locally, Zwiers helps children, through CASA, and countless executives in the toy industry.

WIT’s 2018 Wonder Girl Award honoree is Ariana Gentry, the first-ever Toys “R” Us President of Play. Gentry rose to the top of the ballot during the company’s 2016 President of Play Competition—standing out from more than 1,000 candidates. As the company’s champion of play, Gentry is the company’s resident toy tester and plays with the hottest products and games. She also regularly serves as a Toys “R” Us spokesperson at red carpet events, on social media, and anywhere else the company needs a real kid’s input.

Voting for Wonder Women Awards will be open to all WIT members, board of directors and advisory board, beginning on December 18, 2017. Tickets to the Gala are now available for purchase by clicking here. To learn about WIT’s 2018 annual Sponsorship opportunities and individual Superhero Circle donation program, please click here. 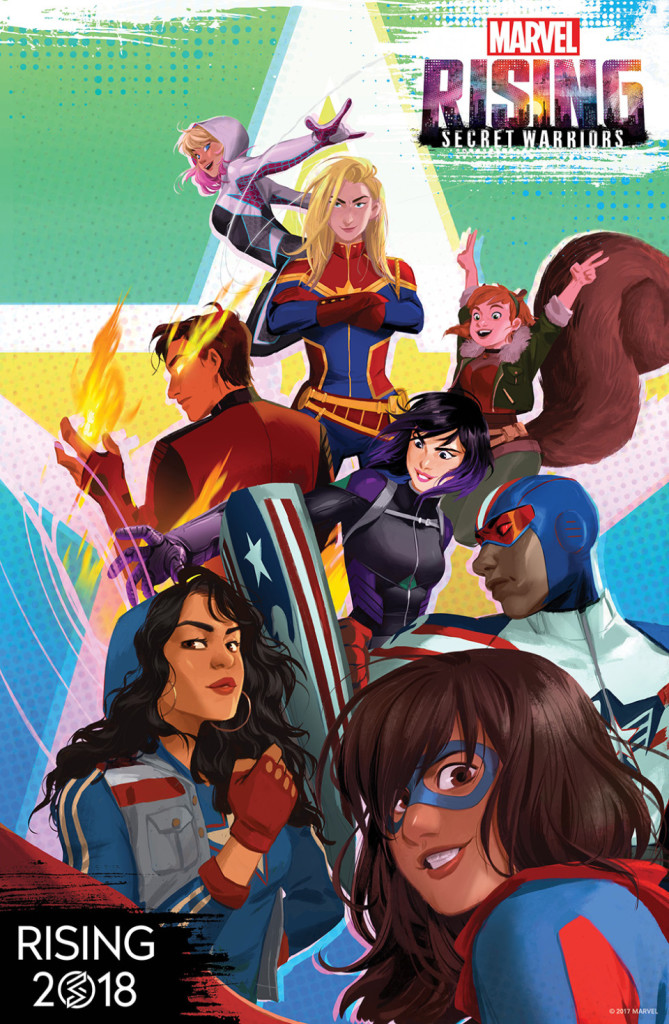 Marvel Entertainment announced Marvel Rising, a new, multi-platform animation franchise starring the next generation of Marvel superheroes set to launch in 2018. The program will launch with six, four-minute digital shorts that spotlight Spider-Gwen with her new secret moniker, Ghost-Spider, and introduce audiences to the world of Marvel Rising. Following the shorts, a feature-length animated film, Marvel Rising: Secret Warriors will premiere later in the year. Distribution partners for the content to be announced at a later date.

Marvel Rising: Secret Warriors brings together Marvel’s newest and beloved characters that have garnered major fan excitement over the last few years. Powered teens Ms. Marvel, Squirrel Girl, Quake, Patriot, America Chavez, and Inferno join forces as an unlikely, but formidable crew of aspiring heroes. When a threat no one could have expected bears down on the Marvel Universe, this ragtag, untrained band of teens have no choice but to rise together and prove to the world that sometimes the difference between a “hero” and “misfit” is just in the name.

For more information on this new franchise, click here. 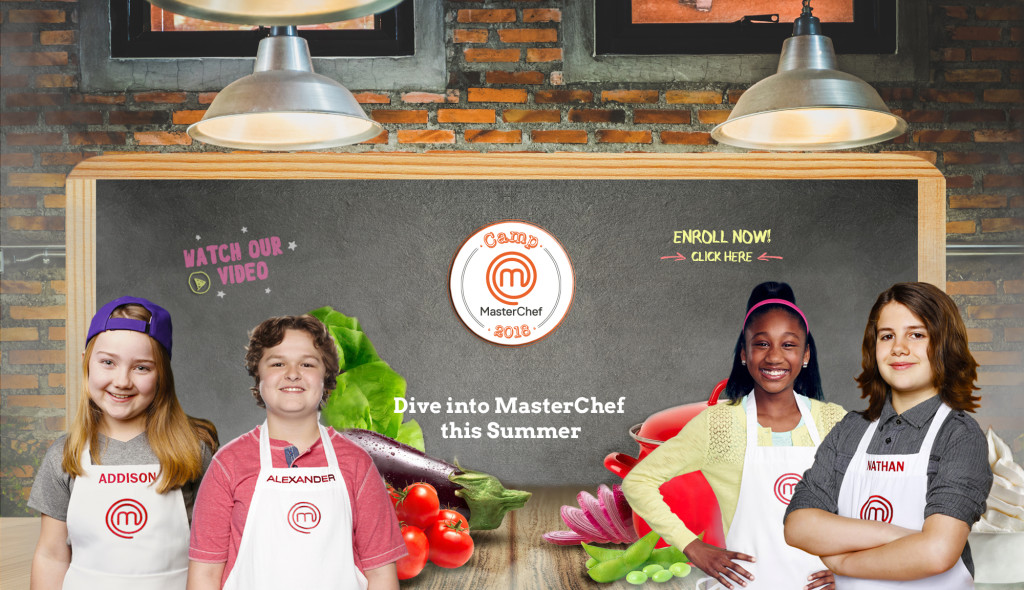 The one or two-week overnight camps with themed programming will debut in two locations Rabun-Gap, GA (June 3) and Kent, CT (June 17) with additional locations to be added in 2019. Programming will include special competitions, hands-on cooking lessons, outdoor sports activities, interactive challenges and more.

Masterchef and Masterchef Junior are reality competition shows that blend cooking challenges and inspirational stories with passion, creativity and a love of food. Both shows air on FOX.

For more detailed information and to register for Camp Masterchef, visit us at: www.campmasterchef.com

These individuals were selected for induction by members of The Toy Association in recognition of their contributions to the industry and the impact they have had on the lives of children through a lifelong commitment to toys and play. They will join an impressive roster of 74 toy industry luminaries, including Jim Henson and George Lucas, who have been inducted into the Hall since it was established in 1984. Their induction ceremony will take place on February 16, 2018 in conjunction with the annual Toy of the Year (TOTY) Awards gala in New York City.at The Ziegfeld Theatre in New York City

A new national survey of independent retailers finds that shifts in the retail sector are playing out differently for independents than they are for chains. Two-thirds of survey respondents report that their smaller size and greater understanding of their local markets makes them more nimble than national chains and better positioned to respond to shifts in their sector.

The survey comes as national chains are declaring bankruptcy, malls are going dark, and e-commerce continues to grow. Headlines have started referring to a “historic tipping point” for American retail. Reporting on this issue, however, has focused almost exclusively on national chains.

The survey, which was conducted by Advocates for Independent Business (AIB), gathered data from more than 850 independent retailers in 49 U.S. states. Their responses yield valuable insight into how independent businesses are responding to the changing landscape—and about how they perceive the way their distinct attributes set them apart from retail chains and from Amazon.