LEGO Reports Revenue Has Stabilized in First Half of 2018

The LEGO Group reported earnings for the first half of the year ending June 30, 2018.

In constant currency, consumer sales grew 1 percent, largely in line with revenue growth, reflecting the fact that the group entered 2018 with healthy inventory levels. Revenue for the period was flat compared with the same period in 2017, and operating profit grew 4 percent.

LEGO Group CEO Niels B Christiansen said, “Our plan for 2018 is to stabilize the business and invest to create growth in the longer-term. These results show we’re on track and we are encouraged by the early progress. They are due to strong execution by our market teams and compelling innovation, including the successful launches of new products such as the LEGO Creator Roller Coaster, the Jurassic World range, and the LEGO Technic Bugatti Chiron. While we are encouraged by the progress we are making, there is more to do, and it will take time to return to sustainable growth.

Performance in established markets was stable compared with the same period in 2017. In constant currency, revenue in western Europe grew low single digits, while revenue in North America declined slightly, in part due to the changes in the retail landscape. China continues to perform strongly, with revenue growing double-digits in the first six months of the year.

Operating profit in DKK terms was 4.2 billion compared with 4.4 billion in 2017, a decline of 4 percent, driven by the impact of the weaker US Dollar. The LEGO Group continues to build a strong foundation for longer term growth, reinvesting savings from organisation adjustments to product and experience innovation and channel development. The company also continues to expand in strategic markets and will open two flagship stores in China in the coming year, one in Shanghai in September 2018 and a second in Beijing in early 2019. It will also continue to develop its partnership with Tencent, one of China’s largest internet service companies, and follow the successful launch of its video channel in May, with a games product in the second half of 2018.

During the first half of the year the top-performing themes were LEGO Technic, LEGO Ninjago, LEGO Creator and LEGO Classic. LEGO City and LEGO Star Wars also continue to be amongst the Group’s biggest themes. LEGO BOOST, which combines building, coding and robotics for younger children, continues to do well. Meanwhile, LEGO Life, a safe digital platform where children can share their LEGO creations in a positive and supportive social media environment, continues to grow and currently has more than four million users in nearly 30 countries.

Target announced the Bullseye’s Top Toys of 2018. This year’s guide includes something for every age and budget, from an even bigger L.O.L. Surprise! and Fingerlings Hugs to the latest tech gear and more.

“This holiday season, we’re pulling out all the stops to make Target the ultimate destination for toys, and this curated list of top toys is just the beginning,” says Mark Tritton, executive vice-president and CMO, Target. “We’re going bigger, offering guests thousands of toys, including more than 2,500 new and exclusive items—nearly double compared to last year—and creating even more engaging experiences in stores and online.”

New this year, Target has created an online experience that showcases top toys by key trends of the season. The retailer also will soon unveil a digital spin on its annual kids gifting catalog. Additionally, with services like Order Pickup, Drive Up, same-day delivery shopped by Shipt and free, no-membership-required two-day shipping, Target offers more easy and convenient shopping options than other retailers. Plus, REDcard holders save an extra five percent every day and get free shipping on most items at Target.com.

The event is free and open to the public. It will feature activities for children as well as cupcakes and ice cream while they last. Prizes will be awarded all day and the grand prize will be a one-of-a-kind soft sculpture Little Person signed by Xavier Roberts, commemorating 40 years of delivering babies.

The toy line from Wicked Cool Toys includes the popular Cuties, Adoptimals, 14 Kids” and Little Sprouts Collectibles, and is now at retail nationwide.

The evening will include an education session on the dos and don’ts of retail theft and loss prevention. It will be followed by a Game Night—sponsored by Ketz & Associates, Specialty Marketing Group, Diverse Marketing—designed for retailers to enjoy playing with games in a relaxed, fun, social setting. There is no charge to attend this event.

“Come one, come all! You’ll enjoy some new games, network with other retailers, and get ready-to-go tips for protecting your merchandise—all in one fun evening,” says Kimberly Mosley, President of ASTRA. “Today’s ASTRA is so much more than our annual Marketplace & Academy each year in June. We are increasing the number of opportunities we offer for independent toy retailers to get together and learn and play all year long. Join us in Minnesota to check out a Meet, Visit, Play event.”

In the new report, seven out of 10 parents with children ages 6–11 say that their child joins them for back-to-school shopping at least half the time. For parents of girls ages 10–11, that figure jumps to 81 percent.

MRI’s study also shows that kids ages 10–11 are 47 percent more likely than the average child to have shopped or looked at things to buy on the internet in the last 30 days; but children ages 6–9 are 23 percent less likely to have done so.

MRI’s Survey of the American Consumer is accredited by the Media Rating Council (MRC), which conducts annual audits of MRI’s methodology, fieldwork, analytics, and data handling systems. On behalf of clients and the industry, the MRC assures that audience measurement services are valid, reliable, and effective. MRI’s American Kids Study mirrors the Survey, capturing demographics, media usage, lifestyles, and attitudes for kids ages 6–11. MRI also asks caregivers to monitor and contribute to the research. The result is a national sample of the 44 million households. The American Kids Study is not MRC accredited. 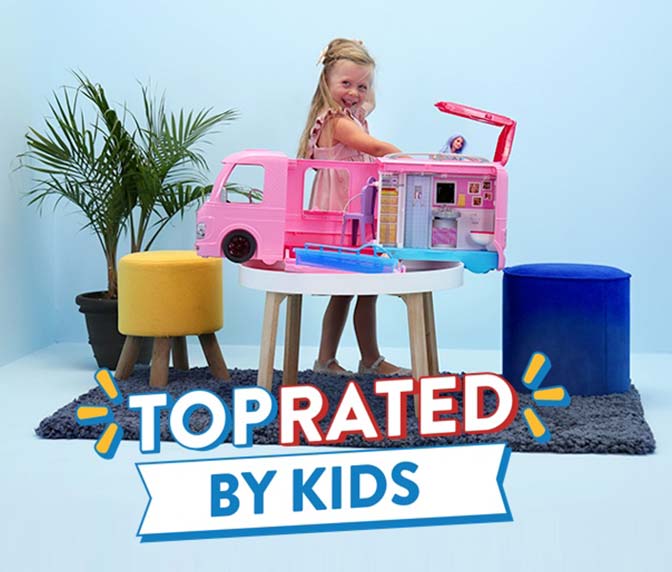 Walmart unboxed its plans for America’s Best Toy Shop: its destination for toys, in stores and on Walmart.com. Walmart’s toy aisles are set to offer the best toys at the best prices along with more fun for everyone than ever before.

Walmart has expanded its toy aisles and toy offerings this holiday, with thousands of new and exclusive items from top brands, making it Walmart’s broadest assortment of toys yet.

Walmart recruited a diverse group of hundreds of kid toy testers and toy influencers, such as Ryan Secret of Instagram fame, YouTube star Kyle’s Toys and Games, and Vine star Ava Ryan, among others to ensure its list had both breadth and depth at every price point, according to Anne Marie Kehoe, vice-president of toys for Walmart U.S. While Walmart does not share what percentage of its business toys contribute, Kehoe did add that its toys division experienced the same growth as its Q2 earnings report (U.S. sales were up 4.5 percent).

“Walmart has always been a destination for toys,” said Kehoe. “But today, we are making even bigger investments in the category to ensure we have the widest selection of toys at the best prices and an unmatched in-store and online experience to show customers the best place to shop for toys is Walmart.”

The investment includes a National Play Day on September 8 at more than 1,500 locations, more in-store toy demos than ever before, and Nerf and Hot Wheels toy roadshows through November 1. In-store toy demos include events highlighting toys from Ryan’s World, Barbie and Transformers. The company will also widen its toy selection by 30 percent in stores and by 40 percent online.

Walmart’s Top Rated by Kids list is up from 25 toys in previous years to 40 toys. Here’s the list:

Walmart’s layaway service is also now open, offering customers the opportunity to pay off items throughout the season. The Top Rated by Kids top 40 toys list, along with thousands of other items in Walmart stores are available to reserve on layaway accounts.