Spin Master and Cartoon Network Enterprises (CNE) announced an exclusive partnership giving the cable network’s consumer products division all global licensing and merchandising rights for the toy maker’s portfolio of brands. As licensing agent for Spin Master’s portfolio, CNE will be charged with building comprehensive consumer products and merchandising programs for all of its brands, but three major brands will be the focus out of the gate: Liv, Zoobles, and Tech Deck.

CBS Consumer Products and specialty retailer bebe stores will introduce a branded clothing line—Obebe for 90210—based on CBS Television Studios’ 90210 television series for The CW. The apparel partnership program represents a collaboration between producers and wardrobe stylists from the show and bebe’s creative design team. The line will be introduced simultaneously on-air for viewers and in-stores for consumers. The new line will launch in conjunction with new episodes of the series’ third season this fall.

Paul Frank Industries announced that it has partnered with chocolate giant Nestlé Crunch to introduce the limited-edition Paul Frank Nestlé Crunch bar. Under the agreement, a Nestlé Crunch bar will be tucked inside a colorful gift envelope that doubles as a holiday card. The packaging features holiday artwork and the characters from the Paul Frank collection including Julius the Monkey and Worry Bear. The piece is finished with a special note where a message can be written. It will be available for holiday 2010. 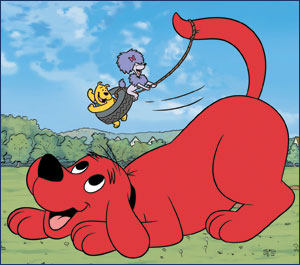 Scholastic Media also announced new deals for Clifford the Big Red Dog that will bring the property into categories ranging from apparel and framed prints to musical instruments and even chocolate throughout 2010. Leading with apparel, SM has aligned with Trevco for a line of Clifford the Big Red Dog T-shirts in infants, toddlers, youth, and juvenile sizes. For the home, Starry Story will offer framed and unframed Clifford prints and lithographs. SM then turns its focus on children’s music through its deal with Kidz Toyz, which will release an electronic keyboard with other musical instruments to follow. And, finally, Healthy Chocolate will introduce various branded, mostly organic, chocolate products.

Warner Bros. Consumer Products (WBCP), on behalf of DC Comics, has joined forces with retailer colette for a line of exclusive merchandise to commemorate the 75th anniversary of DC Comics. A collection of the world’s top French designers have teamed up to unveil this anniversary line, including Karl Lagerfeld, Sonia Rykiel, Balmain, Lanvin, Repetto, Roger Vivier, Maison Michel, Thierry Lasry, Julien David, Alexis Mabille, and Pierre Hardy. This collection is available in June exclusively at colette.

adidas and Source Interlink Companies announced a licensing partnership to bring the pages of basketball magazine SLAM to life in apparel, headwear, footwear, and accessories for the 2010 holiday retail season. The adidas/SLAM collection will feature covers and cover art from SLAM’s archives on adidas manufactured products.

CBS Consumer Products and CafePress have signed a worldwide licensing agreement that allows TV fans to design and sell authorized show merchandise from CBS’s television library of more than 180 shows. The partnership will allow consumers to customize their own apparel, drinkware, home, and stationery/office products.

The Harry Fox Agency (HFA) announced that it has entered into a mechanical licensing arrangement with LiveCut for the use of HFA’s Express Live service. Express Live provides the licenses necessary for immediate distribution of live recordings moments after a live show ends.

Telemundo, the NBC Universal Television Consumer Products Group, and Big Tent Entertainment, in association with The Richline Group and designer Udi Behr, are introducing Telemundojewelry.com. The new website offers fans a chance to purchase the jewelry pieces worn by the actors in Telemundo’s programming. Behr has chosen the first collections using the rich storylines and colorful characters as his inspiration. Featuring seven pieces each, the two collections incorporate a variety of metals, textures, and vivid hues.