Sharper Image, in partnership with the inventor community, Quirky, has launched an open invitation for inventors to submit new innovative toy ideas as part of the Sharper Image Toy & Game Invention Challenge. 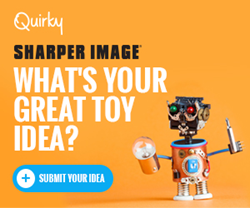 “It’s every inventor’s dream to work with a brand like Sharper Image,” says Gina Waldhorn, president of Quirky. Waldhorn says to date the platform has received tens of thousands of toy and game ideas, and it’s one of the most passionate categories for inventors. With the Sharper Image Challenge the community is now getting a chance to channel their creativity towards building the next great product for one of the most recognizable brands in the world.

“We love working with inventors and are constantly inspired by their leading edge thinking and seemingly unlimited creativity” says David Conn, CEO ThreeSixty Brands. While open to any and all toy and game ideas, Sharper Image is looking for inventors integrating new technologies such as AR/VR into classic toys, and how they might advance their portfolio of R/C products. Tabletop games, indoor play items, and gifting products are also on the top of the list for the challenge.

The challenge is open now through November 18. To learn more, visit learn more and enter at Quirky.com.

Nickelodeon is inviting kids ages 6–12 and their parents to enter for a chance to win a Nickelodeon Toy Run: Family Style by visiting ToyRunSweeps.com starting today and running through November 4. Three grand prize winners will receive:

The Hershey Company announced a partnership with Ninja and DrLupo for TwitchCon 2018. This will be the brand’s first foray in the gaming world as they team up with the two influencers for a Twitch stream ahead of TwitchCon 2018, the premier event for streamers, gamers and on-demand content fans.

“TwitchCon is something that I look forward to all year because it gives me an opportunity to see what’s in the pipeline and meet up with some of the best the industry has to offer, like DrLupo,” said Ninja. “It’s exciting to see a brand like Hershey’s is getting into the gaming world. Snacking is an essential part of gaming, so partnering with Hershey’s at TwitchCon for the release of their new bar was a no-brainer.”