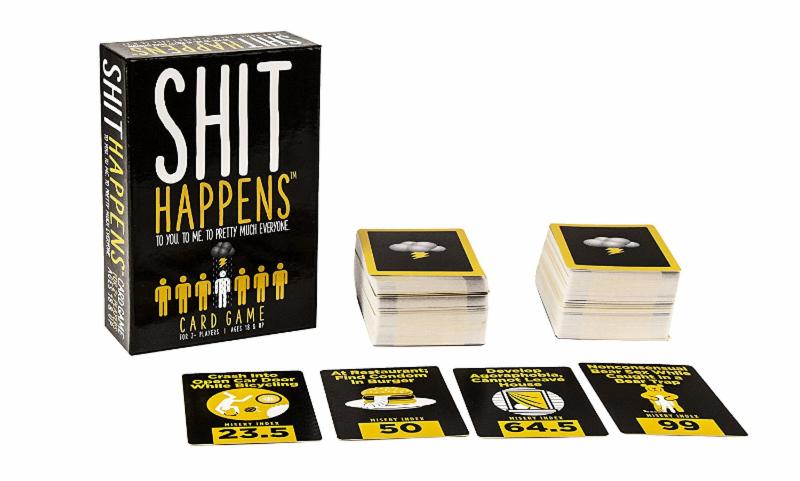 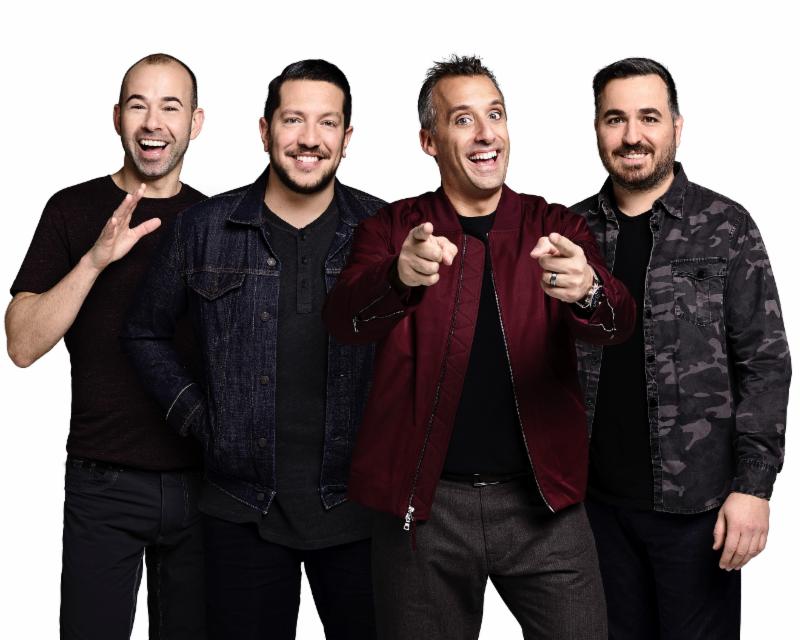 The Shit Happens game line from Games Adults Play has inspired a new half-hour comedy series, The Misery Index. TBS has ordered 10 episodes to its lineup of unscripted programs.

Shit Happens first launched on Kickstarter in 2016. Created by former SNL writer Andy Breckman, the game entails 200 shitty situation cards ranked from 0-100 according to The Misery Index. What’s worse? Stepping in dog poop or finding half a dead hooker in your bed? The player who most accurately guesses, keeps the card.

The creators and stars of truTV’s Impractical Jokers—Brian “Q” Quinn, James “Murr” Murray, Joe Gatto and Sal Vulcano—will serve as recurring panelists on the new series. Collectively known as The Tenderloins, these experts in humiliation will team up with civilian players to compete for the weekly cash prize.
Misery Index will feature two teams of three, each consisting of one civilian player and two Tenderloin teammates. Teams will compete against each other by attempting to determine the ranking of hilarious and miserable real-life events, based on the Shit Happens cards.

Misery Index is Breckman, who is also the creator and executive producer of the Emmy Award-winning series Monk, along with Ben and Dan Newmark of Grandma’s House Entertainment. The series is executive produced by Breckman, the Newmarks, Howard Klein of 3 Arts Entertainment, and Rob Anderson, who will serve as showrunner.
The Shit Happens game line now includes several expansion packs, Too Shitty for Work, 50 Shades of Shit, Full of Shit, and Little Shits. They are available at all major retailers.

Mastermind Toys, Canada’s largest specialty toy and children’s books retailer, launched its first customer loyalty program: Mastermind Toys Perks. Rolled out from coast to coast, the program is available at all 63 store locations and at mastermindtoys.com. The Perks program is a key component in the company’s continued push to invest in new, customer-focused initiatives designed to elevate the shopping experience across channels.

The retailer’s extensive research showed that 94 percent of customers surveyed indicated a strong desire for a loyalty program. Communicating directly with its customers, Mastermind Toys identified the most valued benefits and teamed with Bond Brand Loyalty to create a program that recognizes and rewards loyal shoppers with exclusive perks.

The Perks program is free to join, with no points to track or card to carry. Members are offered free gift-wrapping and loot-bag assembly in stores, receive sneak previews and early alerts about new and in-demand items, get access to members-only promotions and events, and get customized offers and personalized toy recommendations. Perks members will also receive surprise gifts and rewards throughout the year to mark milestones such as birthdays and holidays.

Mastermind Toys also launched a new service that merges its online and bricks-and-mortar channels in the name of customer convenience. Shoppers on the Mastermind Toys website can reserve items to be picked up at their preferred store location. Within an hour of receiving the request, store staff sets aside the selected items for the customer. To date, 93 percent of users said they were “satisfied/very satisfied” with the service, with the same percentage saying they are “likely/very likely” to use the service again.

By mid-November, the company will have opened six new Mastermind Toys stores in 2018: in St. Albert (Edmonton), AB; Saskatoon, SK; Hamilton, ON; St. John’s, NL; Sydney, NS; and Owen Sound, ON. With this round of expansion, the retailer will have 1,175 employees in 65 stores in eight provinces.

Coming off a solid third-quarter of very healthy double digit sales growth, and heading into the busiest shopping period of the year, Mastermind Toys is well-positioned to move ahead with ambitious expansion plans for 2019 and beyond. The company plans to open at least 30 additional stores across Canada over the next three years, with the potential to more than double their store count within the coming six years; 12 of those new store openings are planned for 2019.

As part of these expansion plans, the company has identified an opportunity to open stores in approximately 25 smaller markets. The first of these openings will take place this fall in Sydney, NS, and in Owen Sound, ON, to be followed in the early part of 2019 with store openings in Prince George, BC and Medicine Hat, AB. Additional smaller market store locations will be announced at a later date. 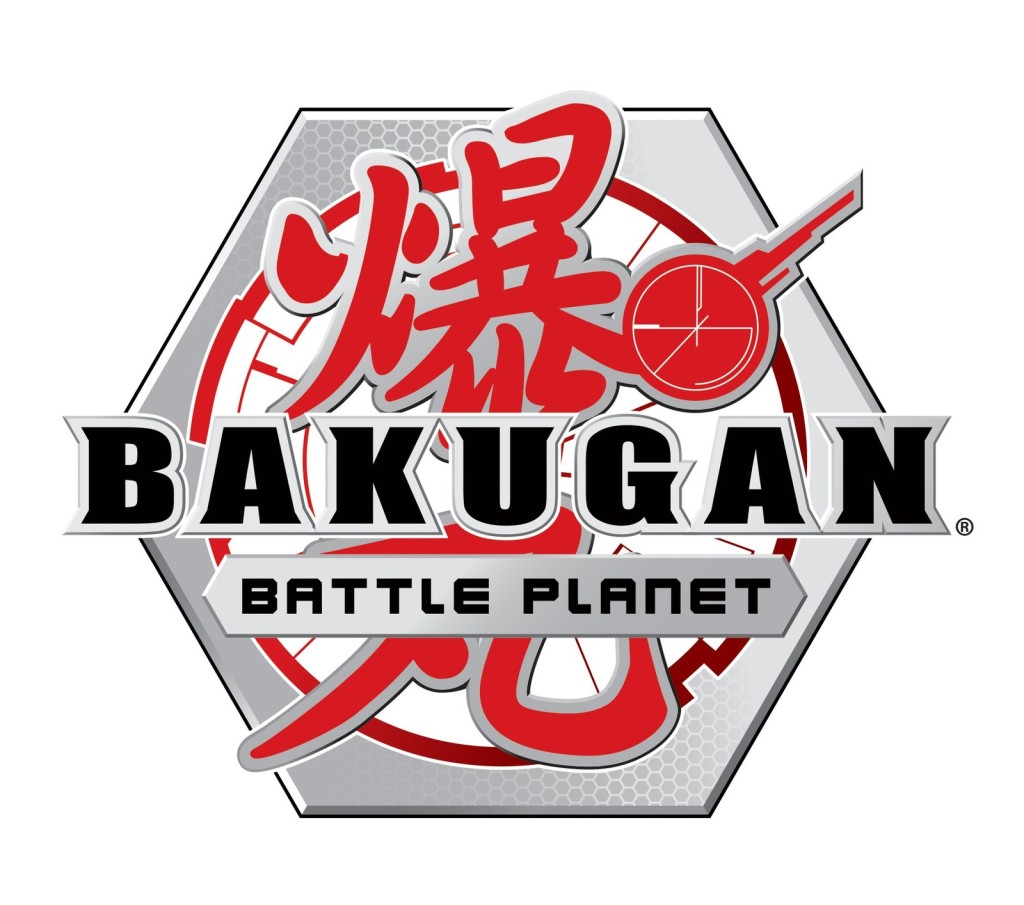 Spin Master, TMS Entertainment Co., and Nelvana announced an agreement in principle to relaunch the global hit Bakugan. Set to debut on the 10-year anniversary of the original series, the coordinated project also includes the development of toys, toy-linked TV animation, and the formation of a joint production committee.
Bakugan originally launched in 2008 and became a global franchise, delivering multiple years of television content. It was named Toy of the Year and License Property of the Year in 2009.
The new series, Bakugan Battle Planet, will air on Cartoon Network in the U.S., Europe, Middle East and Africa, Latin America, Australia and New Zealand, and Teletoon in Canada. The animated series follows the adventures of Dan and his best friends, the first kids on Earth to bond with the alien creatures known as the Bakugan. Additional short-form content will also be available and live online.
The Bakugan Battle Planet toy line will retain the essence of the original toys coupled with new features that deliver card and app play. All-new marble-like balls with infused with technology transform into multiple collectible characters when rolled over a magnetic card. The game will bring different levels of play, from beginner to advanced, and allow players to compete against multiple opponents for enhanced collectibility.
The toy line will be available in North America and other select markets in Q1 2019 and will roll out globally beginning Q2 2019. The animated series will premiere in North America this December, and in Latin America and EMEA in 2019. The Bakugan licensing program, led by Cartoon Network Enterprises in all territories (excluding Asia), will also be available at retail in 2019. In Asia, Takaratomy will launch the toy line in Japan and TMS will manage distribution of the toy, animated series and related licensing program.

CPLG is further extending its international footprint with the acquisition of a 49 percent share in Pullman Licensing, a leading Russian licensing agency owned by Igor Kuleshov, president and owner of Gulliver Holdings, a Russian toy and clothing manufacturer and distributor.
CPLG and Pullman are expected to collaborate on the overall management and operations, utilizing CPLG’s international industry knowledge and expertise and Pullman’s local strength in the market. Pullman will maintain its existing staff in its Moscow office and look to expand the existing portfolio of rights. Pullman’s current portfolio includes Nickelodeon, Paramount, ROI Visual, and Emoji across Russia, CIS, and the Baltics.
The venture, to be named CPLG Pullman, will also represent certain of CPLG’s portfolio, including Line Friends, one of the fastest growing global character brands, and Archie Comics, with further representation to be announced shortly.

CPLG and Pullman aim to complete the transaction by October 30, subject to customary closing conditions and the execution of certain ancillary agreements.

Moose Toys announced that Treasure X Single Pack was the bestselling item in August 2018 in the action figure (excluding battle) segment, according to The NPD Group.
Treasure X features a multi-layered unboxing process, complete with a surprise reveal. Kids need to dig and fizz their way past clues to create their treasure hunter and to uncover the chance to find real gold.
Treasure X is on Walmart’s Top Rated By Kids and Amazon’s Hot Toys for the Holiday Season as top picks for the 2018 holidays. Treasure X is available globally at all top retailers.