Hasbro has officially launched its new line of interactive lightsabers with Star Wars Lightsaber Academy, which allows users to train and battle like their favorite Star Wars characters.

Available this fall, kids can train to become a lightsaber master with the Star Wars Lightsaber Academy Interactive Training System. Download the official Lightsaber Academy App, choose from one of five of the best Masters in the galaxy, and begin your journey to become a lightsaber expert. Learn official Star Wars moves and train and battle with one of five legendary Jedi or Sith Masters. Loaded with Smart-Hilt technology, lightsabers connects via Bluetooth and tracks your motion to evaluate and score your moves. The Smart-Hilt will track progress and help you level up in the app. With two Lightsaber Academy lightsabers (each sold separately), you can battle friends head to head and test your skills.

There will be Level 1 Extendable Lightsabers and Level 2 Electronic Lightsabers available for battle. Each assortment will be sold separately and available at most major retailers.

The Extendable Lightsabers, available in red, blue, and green, extend for a duel with a flick of the wrist. Scan the included code to access content in the Lightsaber Academy app. 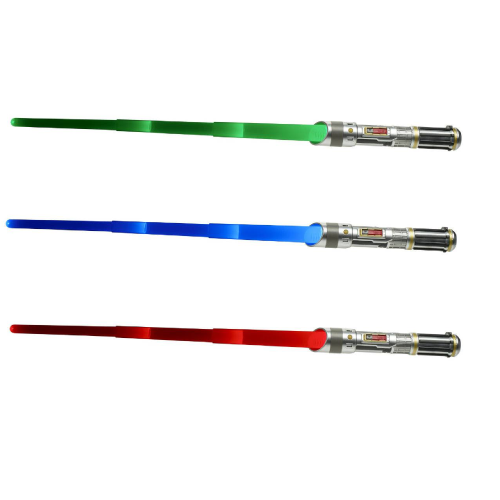 The signature Electronic Lightsabers extend with a simple flick of the wrist as you battle like either Luke Skywalker or Darth Vader. Press a button to hear character phrases. Scan included code to access training and character content in the Lightsaber Academy app.